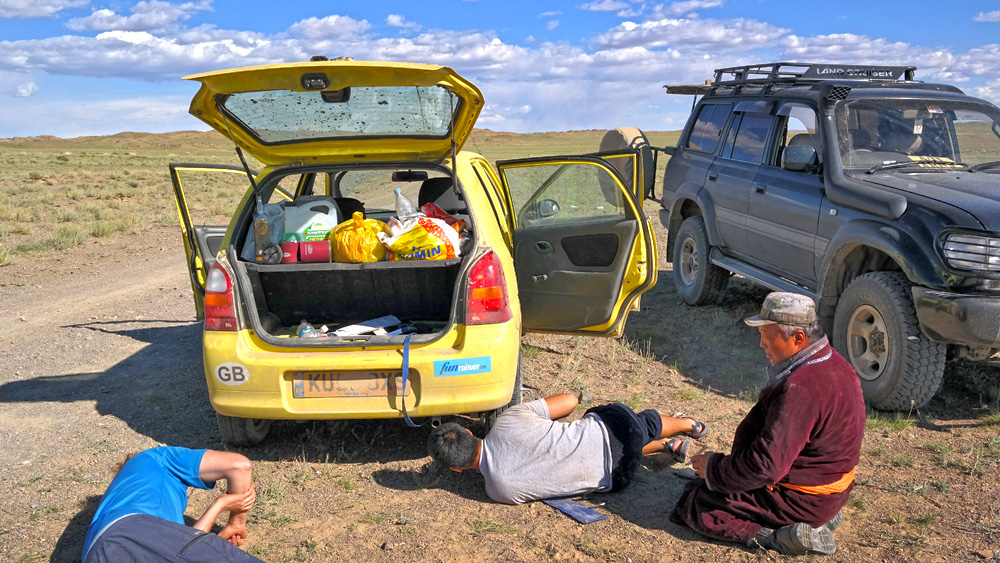 Today we encountered our biggest car problem in Mongol Rally- our car suspension springs were shattered in pieces in middle of nowhere. We were saved by a Mongolian nomad named Gondag.

We didn’t sleep last night and drove all night. The Mongolia sunrise is very beautiful. 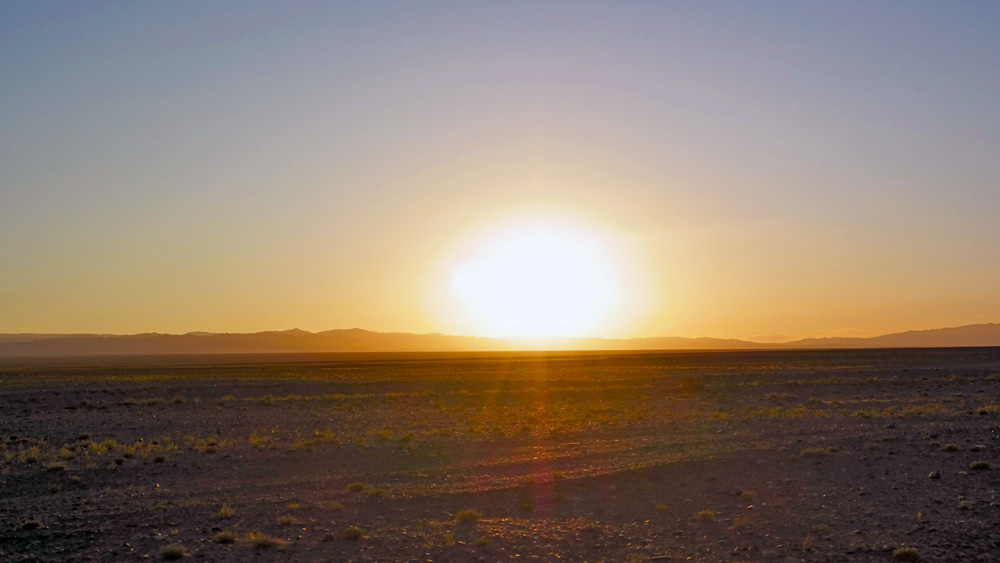 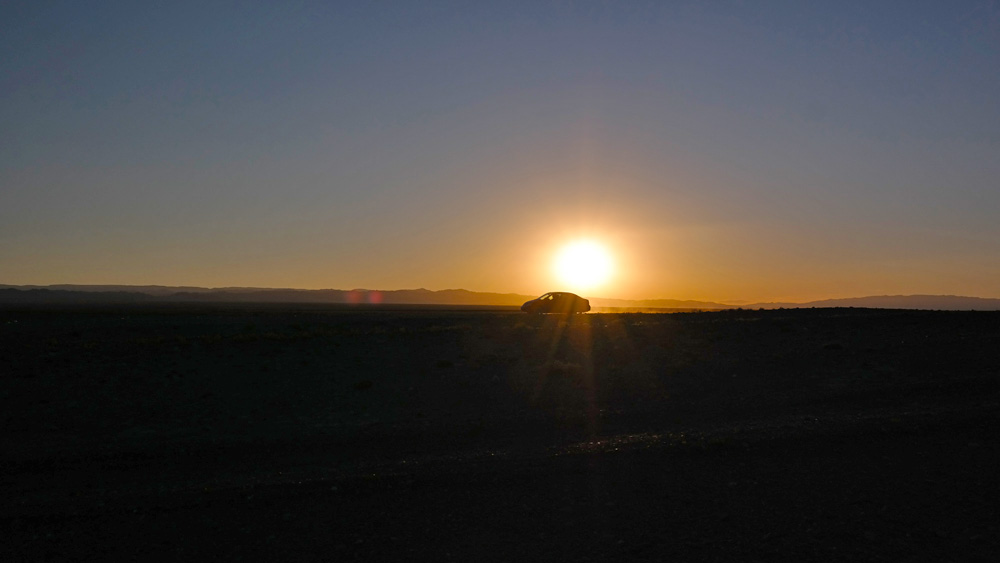 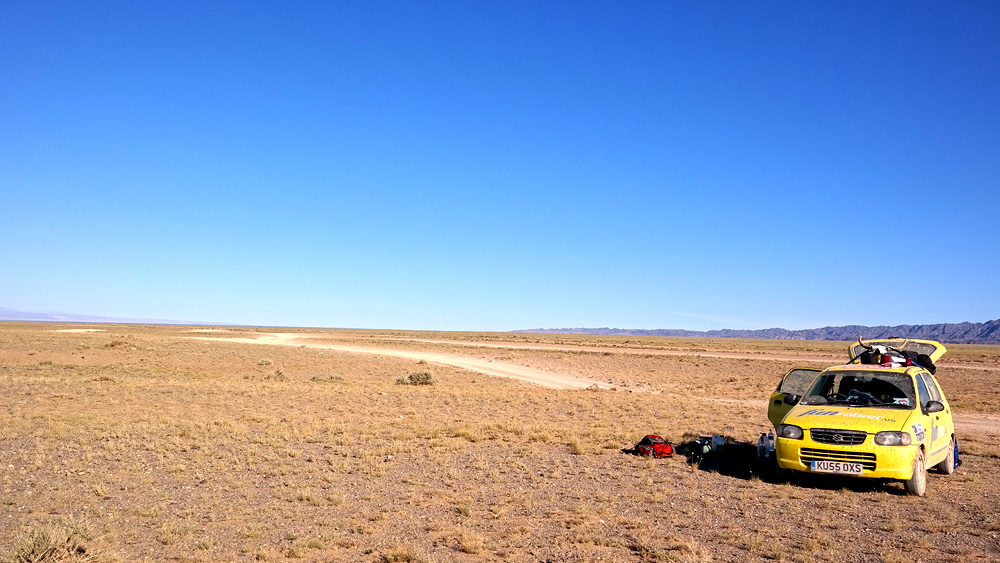 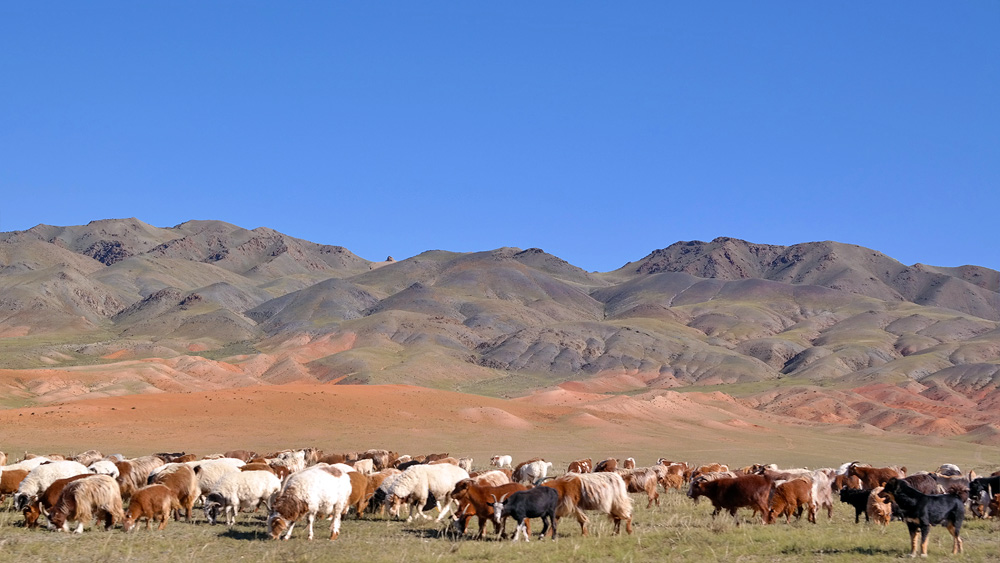 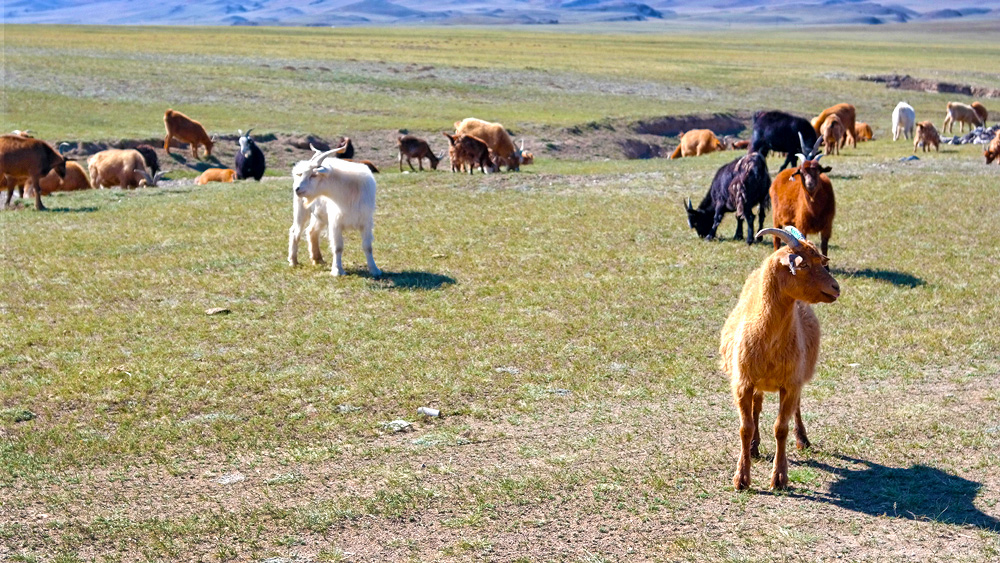 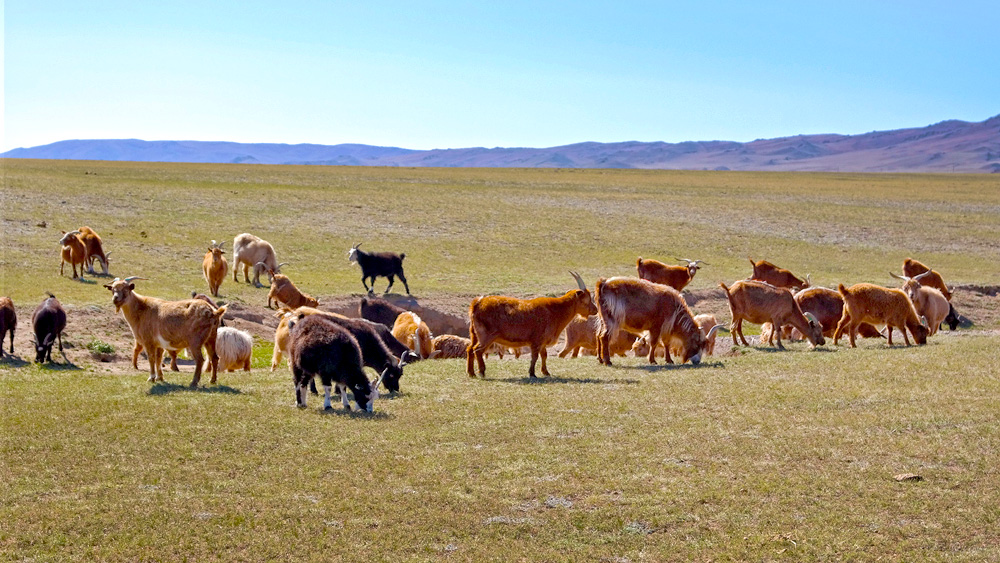 We finally arrived in the city of Altai. We visited the Mongol Rally garage and met Team Raven Shoes and another Mongol Rally team. Their cars are not in very good condition. One of them got the entire rear left suspension system detached. Mongolia road is super rough. 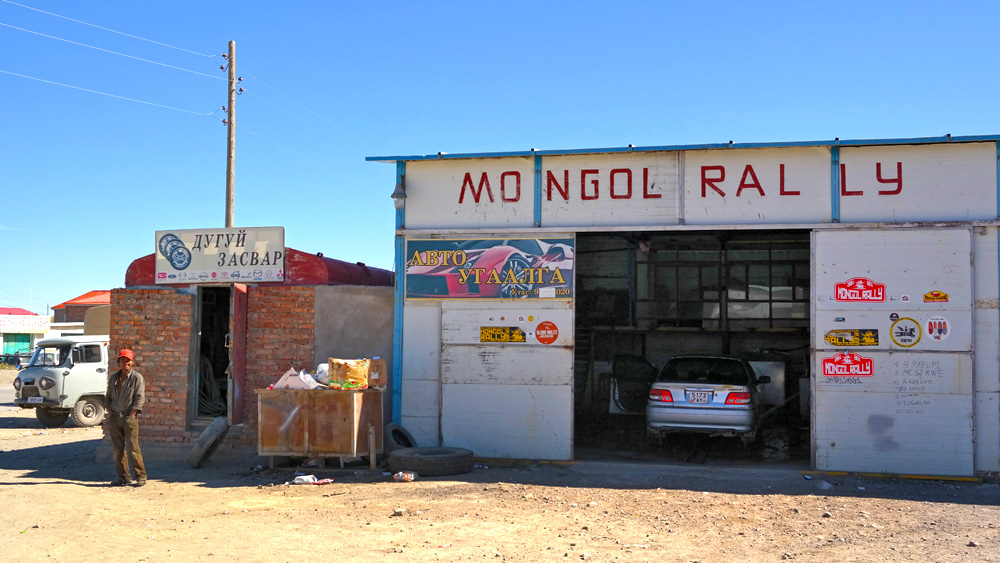 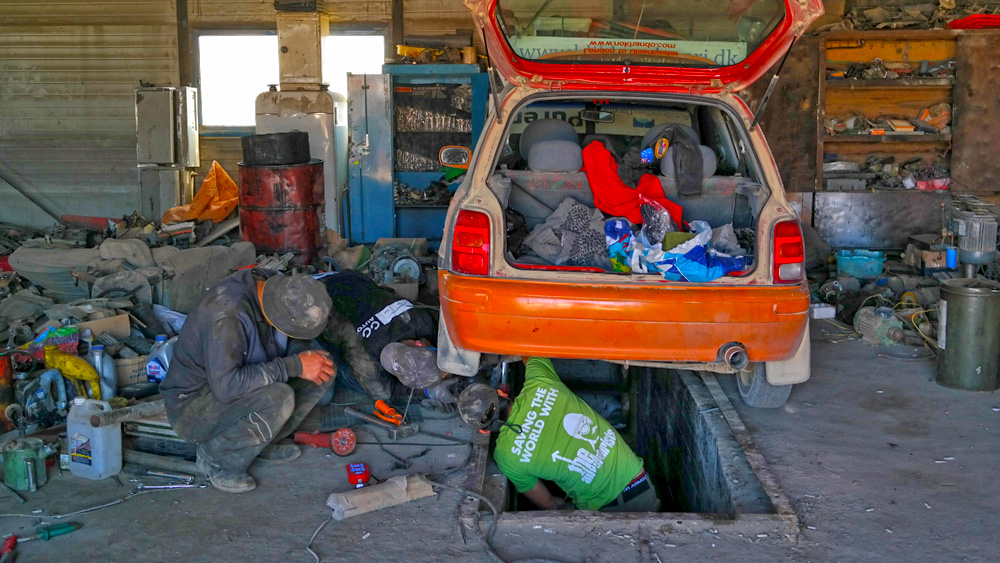 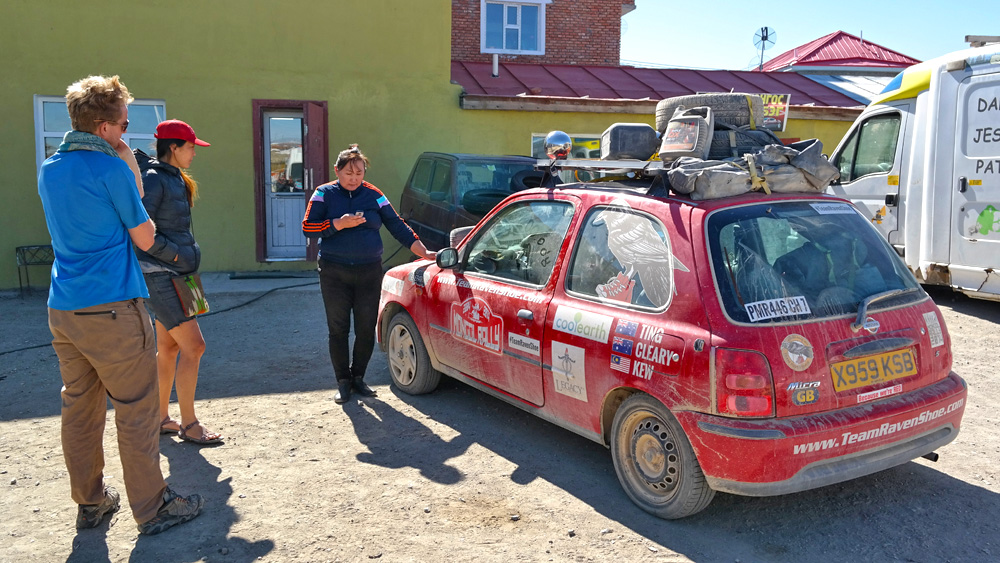 Then we went to a local mall and bought some supplies. I love local market like this, it really offers a glimpse of daily life here. 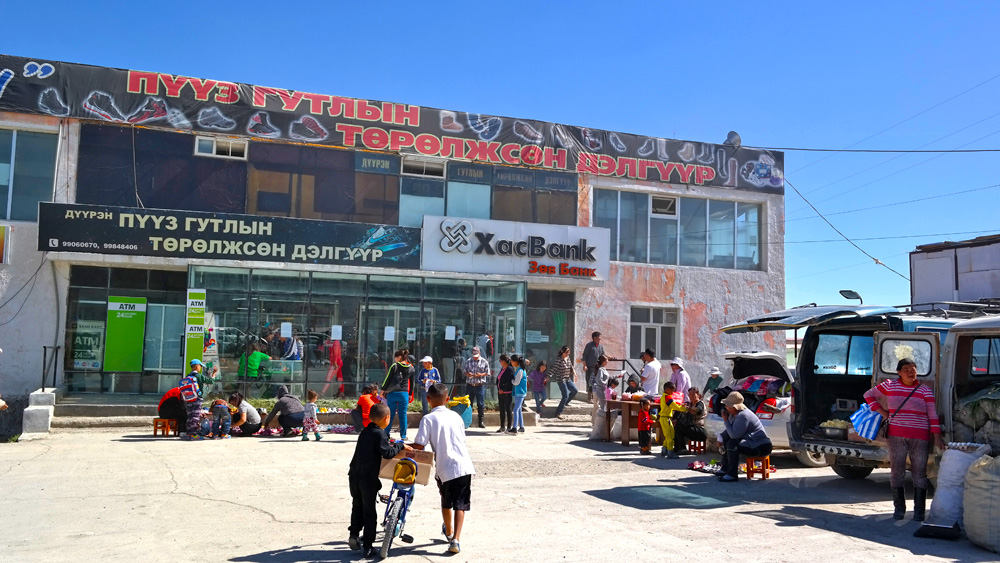 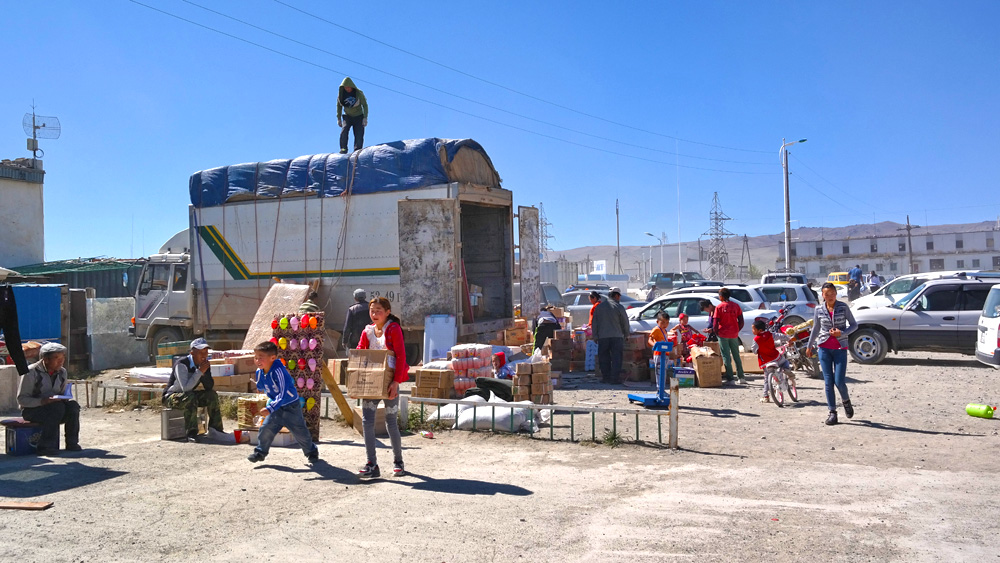 After leaving Altai we took a beautifully paved tarmac highway. We were so excited and for the smooth ride but all of a sudden without any notice the highway ended. We were literally flying in our car several feet up like in the movie and landed on the dirt road. And not long afterwards we realized both of our rear suspension springs were broken in pieces. 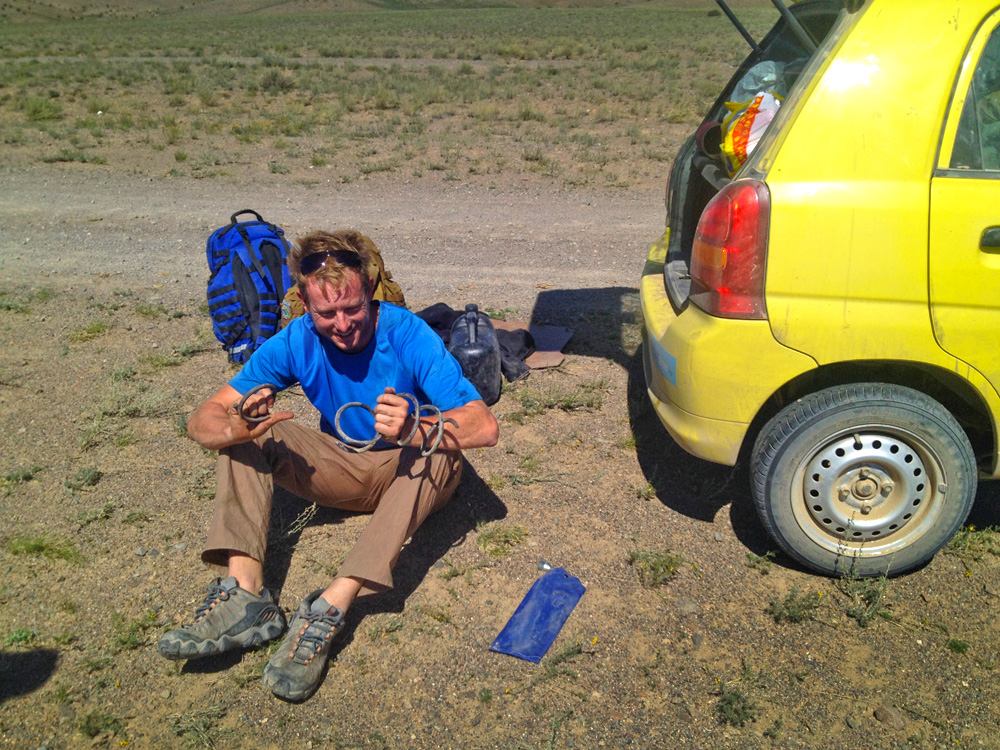 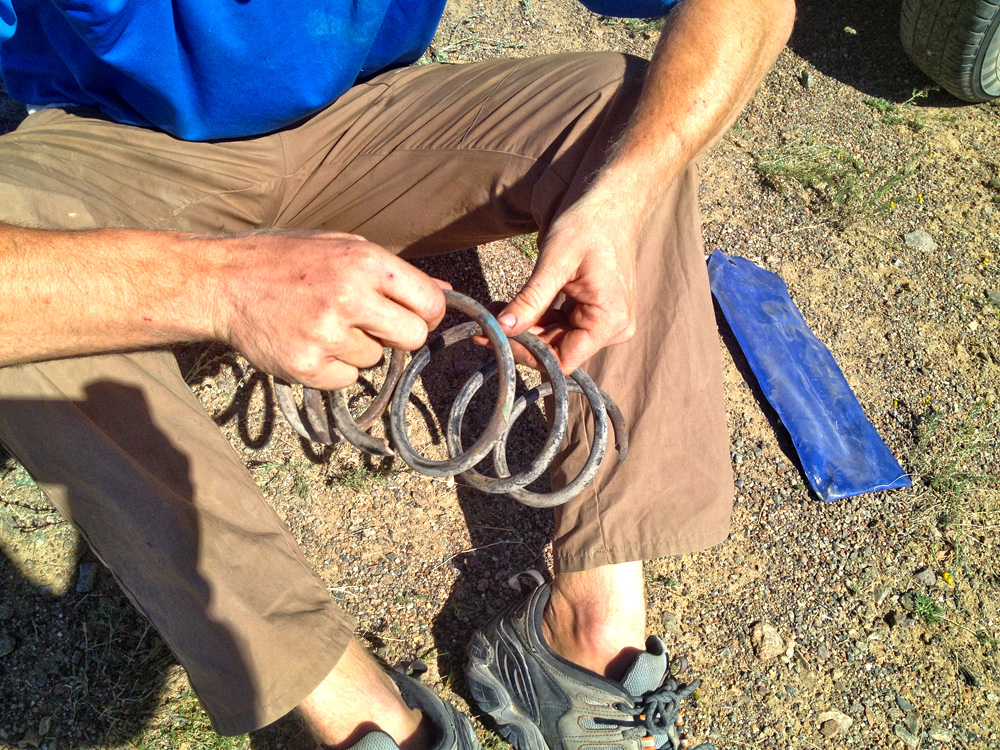 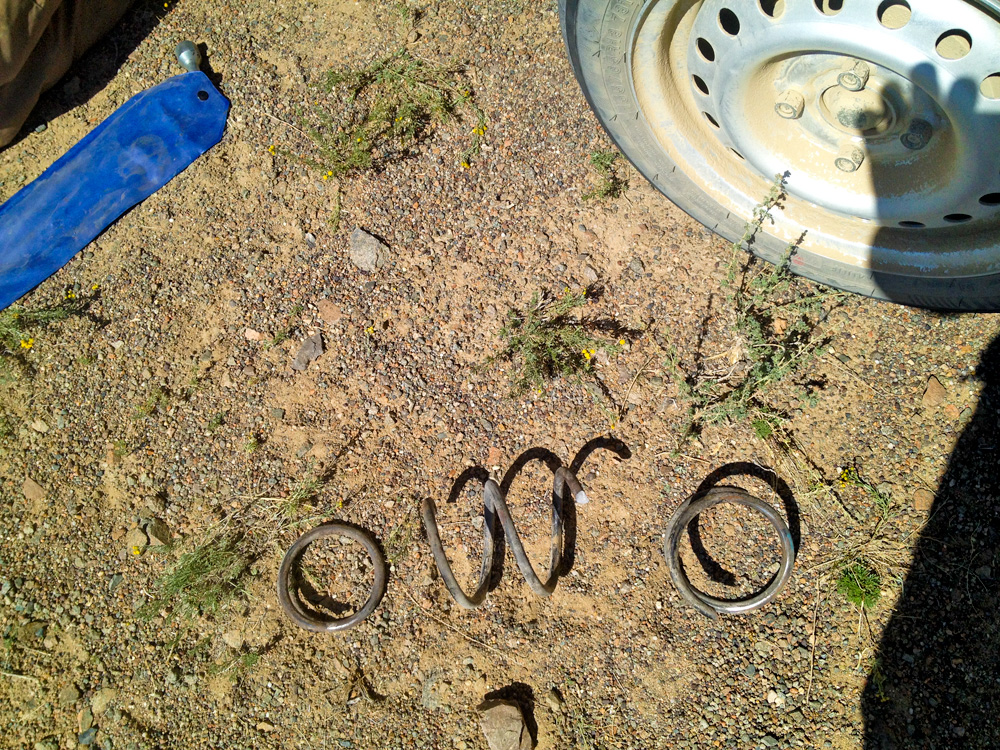 Here is the story with the suspension from Graham:

“We first noticed the rattling sound of what we are pretty sure was the partially broken spring about a week before the spring broke into three pieces and the body of the car decided to sit down on the rear right hand tire.  We had a really bumpy ride in the backseat, and henceforth we were driving slower than we would have liked on the Mongolia “roads”.

Young takes the wheel outside of Altai City and we happily speed along the paved road out of town in glorious comfort… until the paved road ends on a downhill with no warning sign.  We slam the brakes and Takhi Butter (our car named after the famous Mongolian horses and the smooth ride it delivers) takes the impact like a champ and buggers on until Kenneth notices the odd sound of metal gouging into the tire outside his window.

So we are about 80 miles outside of Altai.  We actually took the less used road, and we can see the main Southern Route off in the distance about 10K away.  It’s the only time on the trip I’ve thought we might actually be stuck out here all night.” 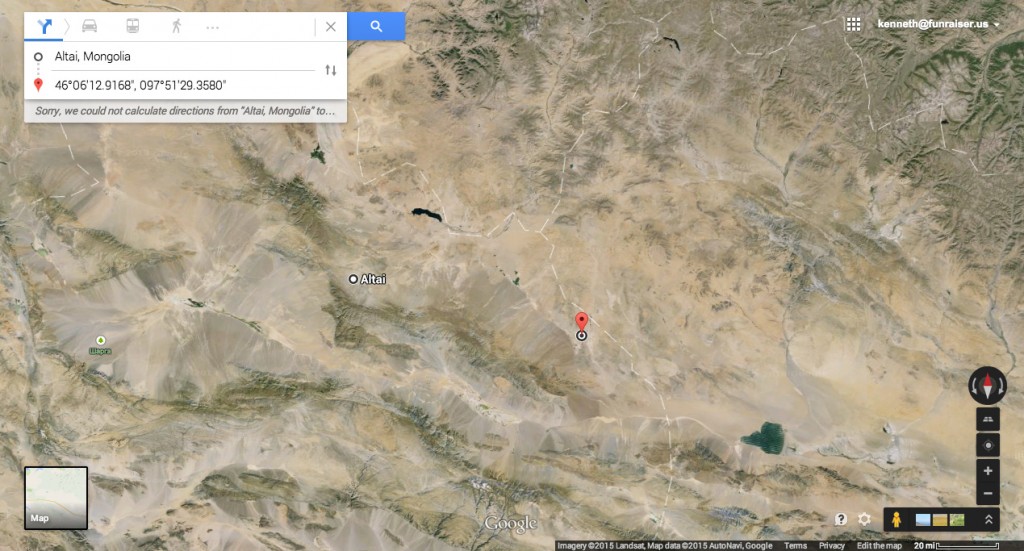 We looked at each other and laughed. What are we going to do? I went through my pictures on my camera and found a photo number of a garage in Altai. We tried to call but there is no mobile connection at all.

There is no way the car can be drove anymore. The car body is touching the tire now. Scratching our head and tried everything we could. We spot from a far far away a small moving spot. We took off our shirts and starting waving at the spot. And here’s how we met our savior, Gondag the Mongolia nomad. I nicknamed him Superman. 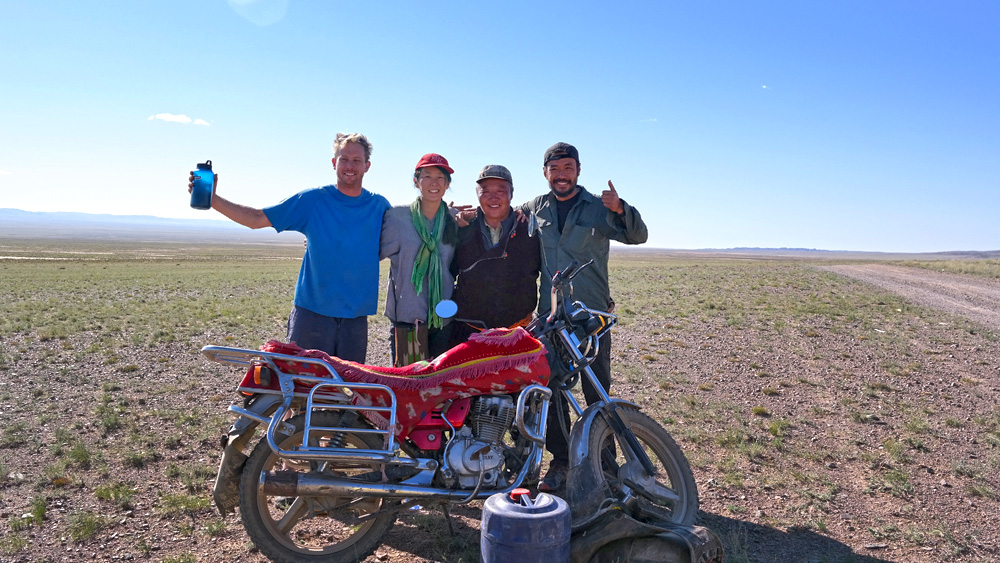 I got on the back of his bike. It was the highlight of the trip, riding on a motobike in the vast Mongolia steppe! Superman Gondag started singing a Mongolian song to me. After he finished I sang him Bob Marley’s “Three little Birds”

“Don’t worry about a thing, ‘Cause every little thing gonna be all right~!”

Graham: “We are rescued by a really cool Motorcyclist that takes Kenneth to a truck stop outpost on the Southern Route.  The motorcyclist, Kenneth, and 2 teenage mechanics in a 4runner come back about an hour later.” 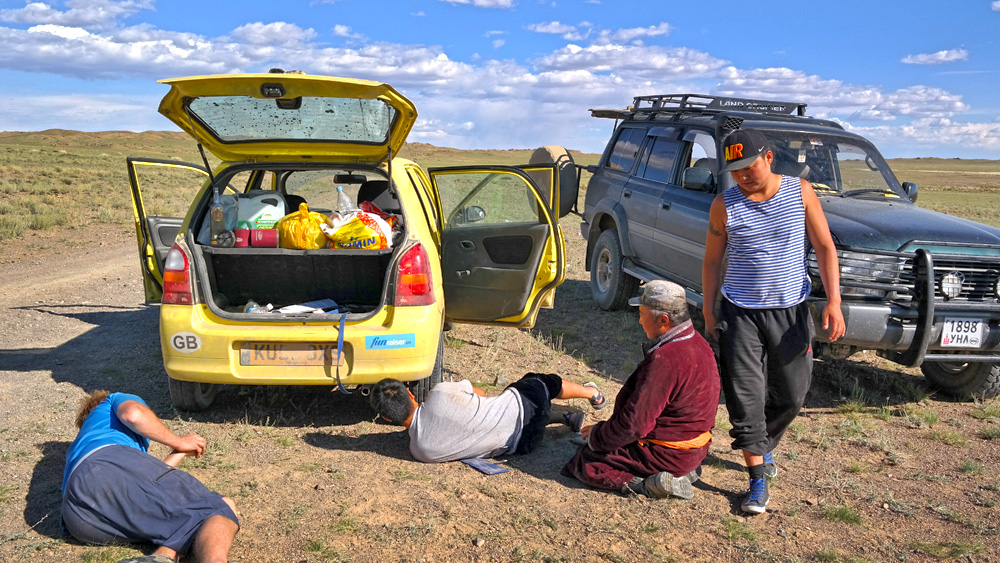 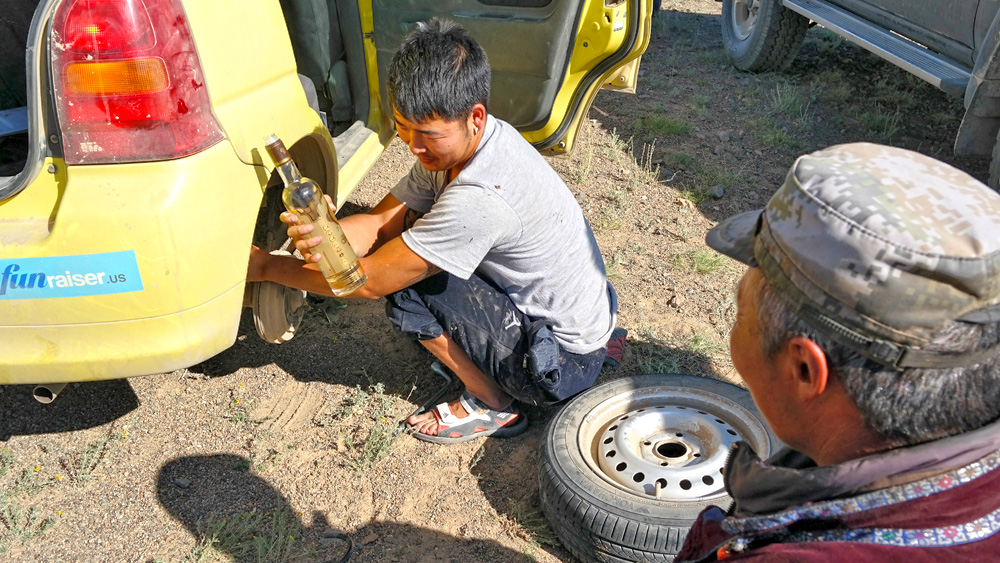 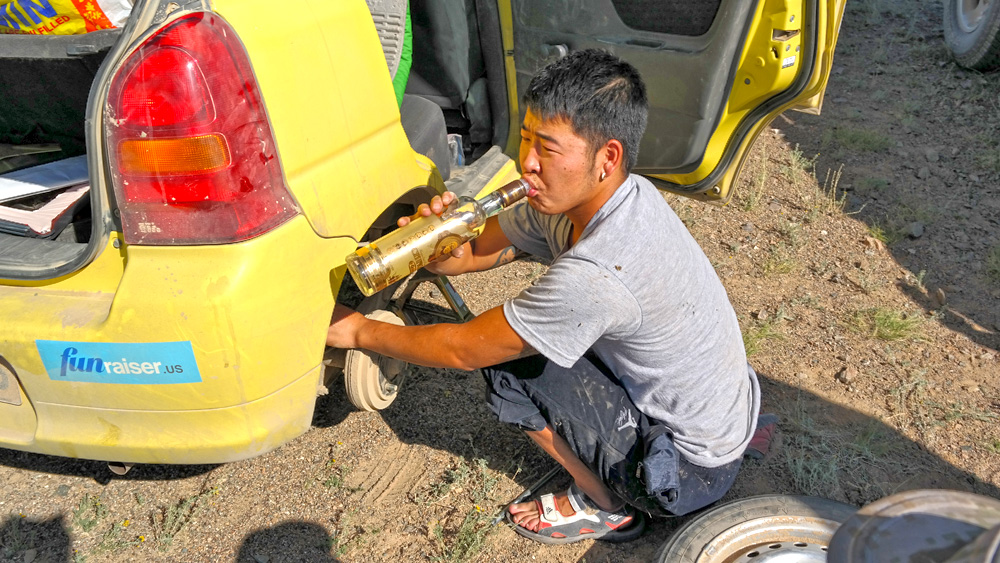 Graham: “The fix was one of the best examples of Mongol resourcefulness that will stay with me forever.  They actually used a car jack in place of the shock absorber!  and then used our regular roof strap to lock in place the car jack with a series of knots.  We then jumped in our car and the 4runner, and caravaned to the truck stop for a more permanent repair.  Their ‘Mongolized’ suspension held up great and we road at 10K-15K per hour.

We almost got towed into Ulan Bataar at this point and we’re so happy we didn’t.

The ‘permanent fix’ was just as good.”

We had some food at a local place. Here are the chefs. 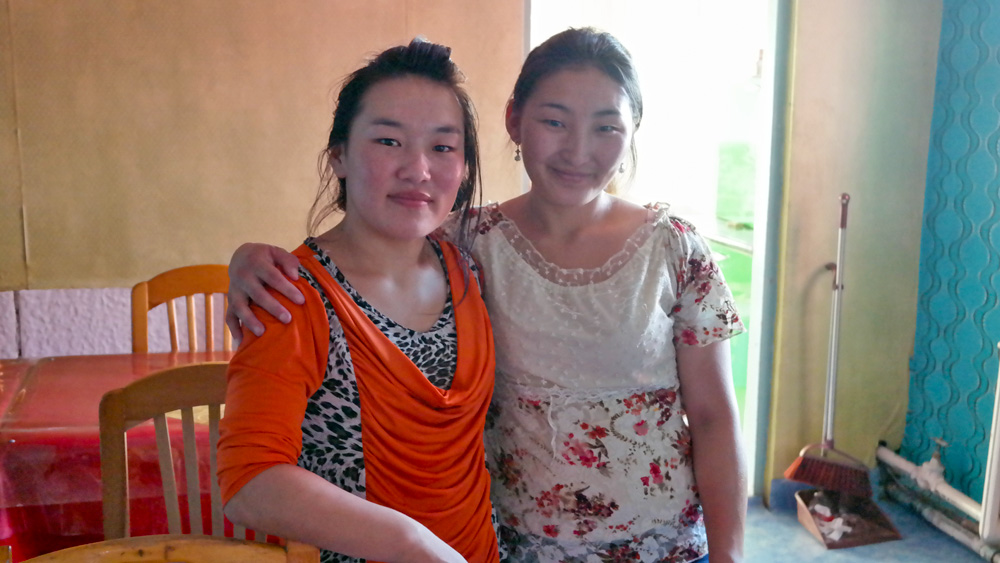 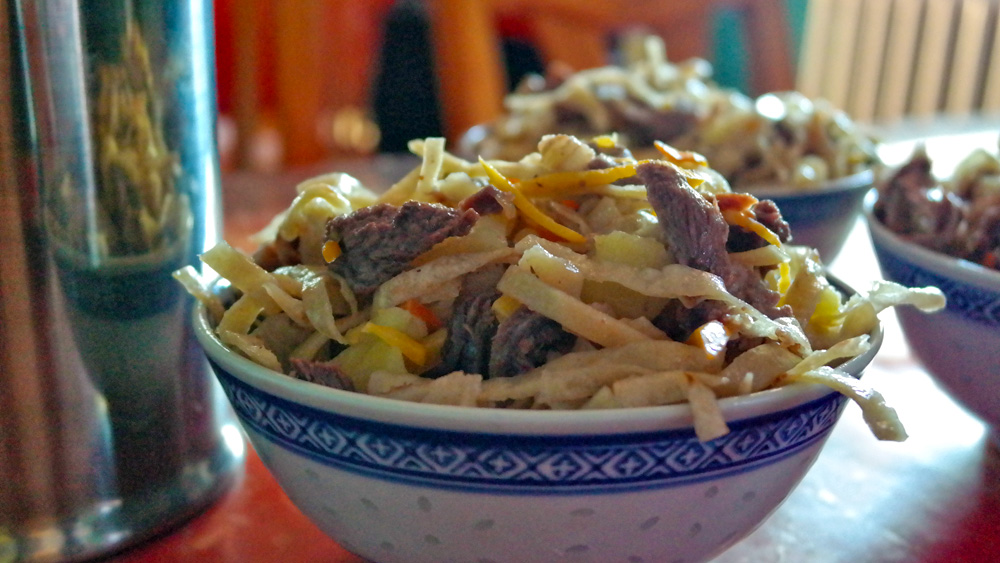 They savaged two suspension springs from another sedan sized car and fixed Tahki Butter in their backyard. 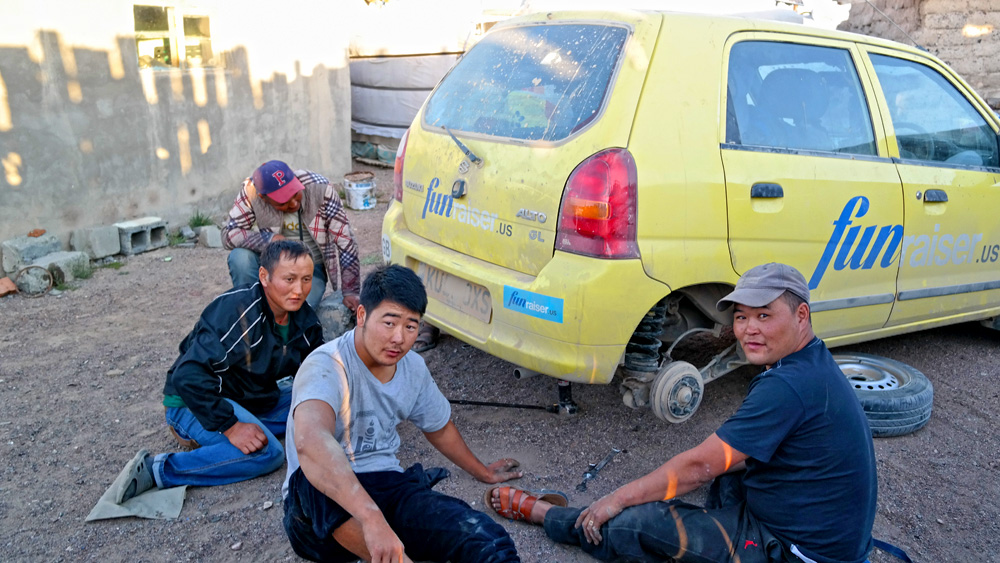 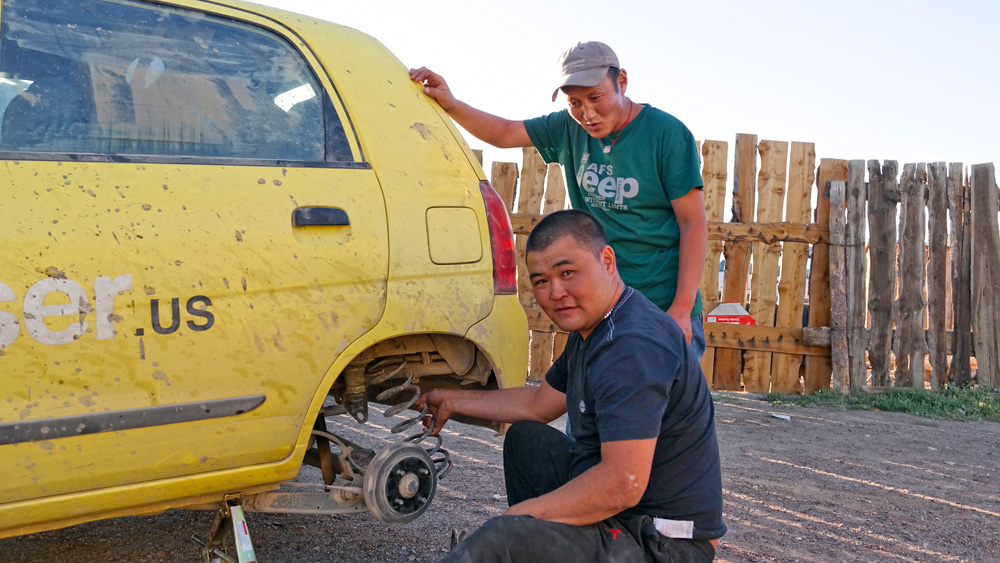 Graham: “They took these huge springs off this graveyard car and did a transplant on the rear springs.  So we drove the rest of the way to the finish line with a grossly over raised rear end.  Since the springs weren’t the right size, the repair overstretched and broke the dampening portion of the suspension which lead to a bouncing effect after each bump in the road as the springs went up and down with no restriction, so we galloped to the finish line.  The raised suspension also overstretched the hydraulic line to the rear brakes which now rubbed against the wheel.  The head mechanic was like “no problem”. we drove on.  At the finish line the hydraulic line was almost toast.

Other funny info:  We had such a fun time hanging out with the locals that we didn’t notice that one of the guys put a sets of lug nuts on only finger tight, and the wheel almost falls off 1K outside of town in the dark, sweet.”

While waiting for our car being fixed, we wrestle with a Hawk/ Falcon level Mongolian Wrestler. Definitely one of the highlights of our epic Mongol Rally roadtrip!

It was great fun! THANK YOU for all our your help! 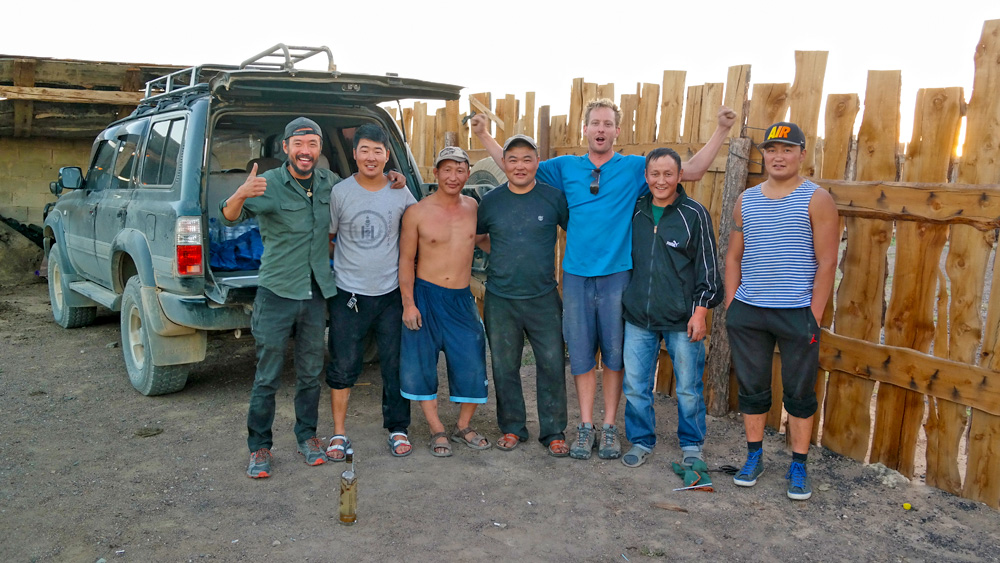 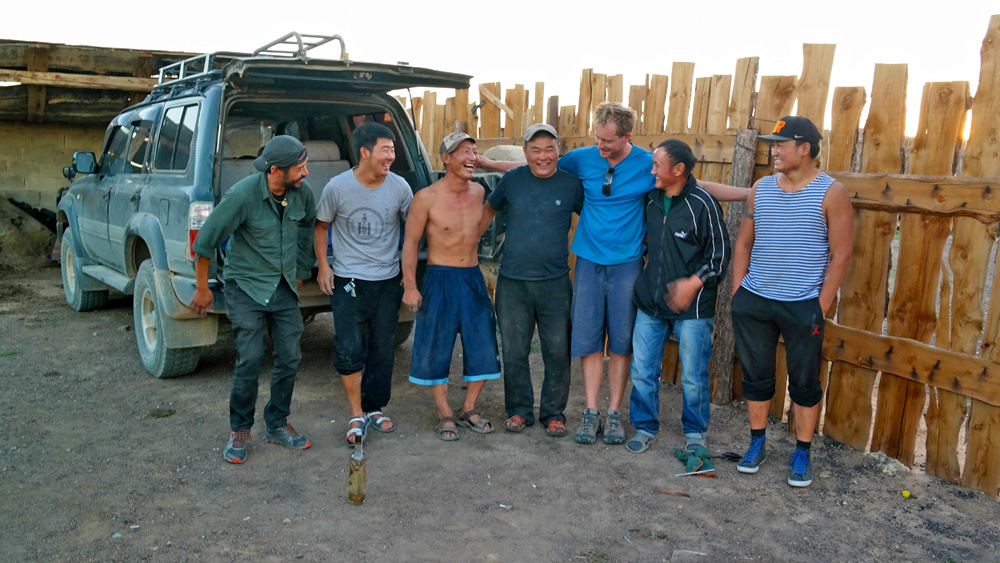 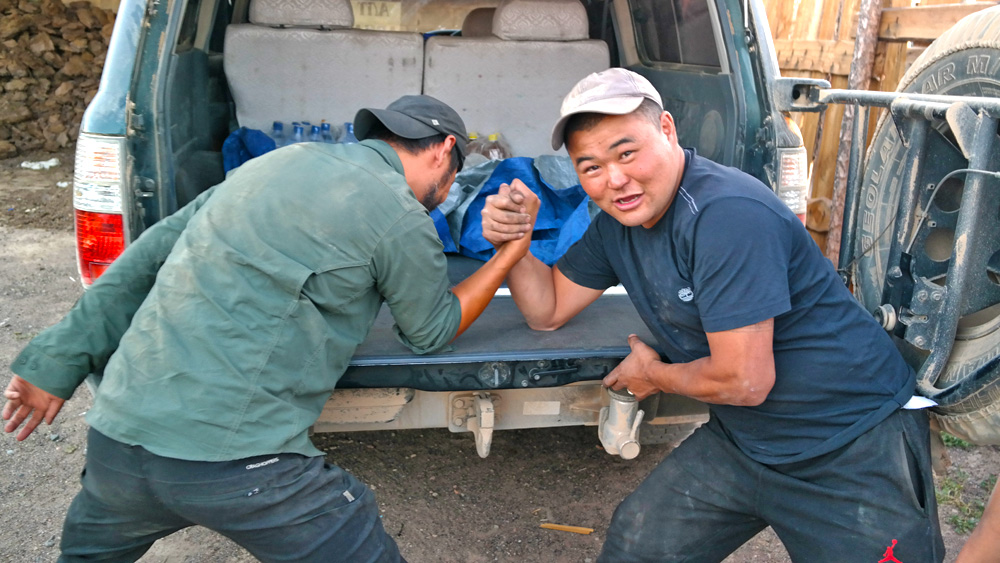 After our new suspension is installed we kept on driving, and slept 2 hours inside Takhi Butter in the middle of nowhere.