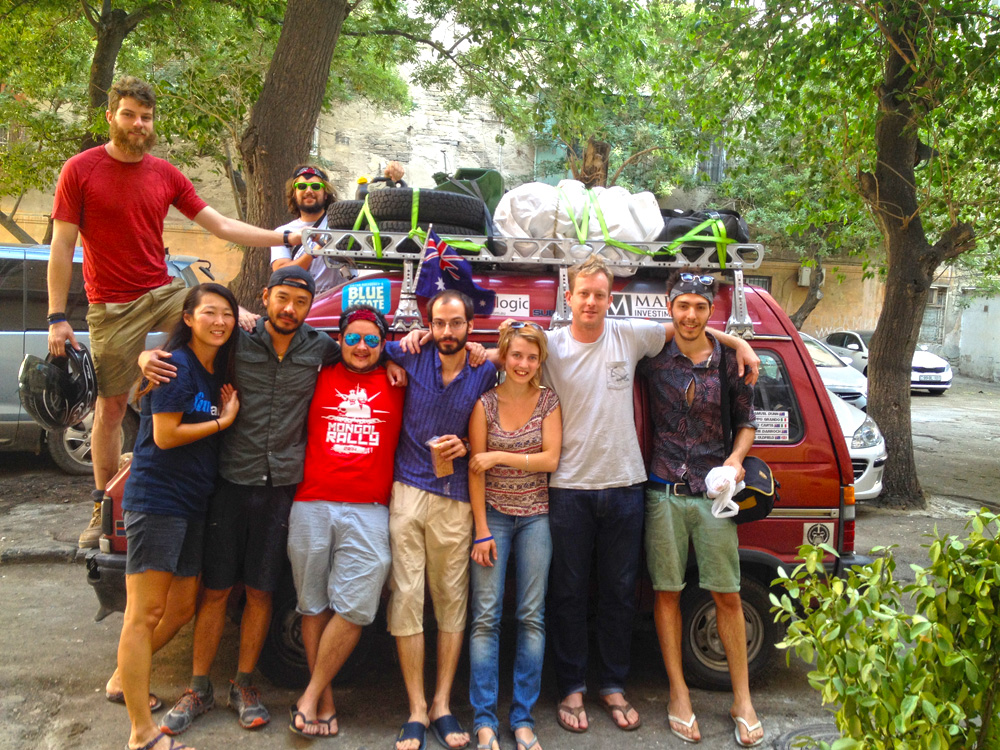 GETTING TURKMENISTAN VISAS IN BAKU

Getting the Mongol Rally Turkmenistan takes a lot of patience. This morning we waked up early to go to the Turkmenistan embassy. Online through various resources their business hours is supposed to be 9am to 12pm, Monday to Friday. We got there around 9:20am.

It is a tricky place to find our taxi driver arranged through our hotel has no idea where is it at all we ended up driving out of town and asked other taxi drivers. At the end we arrived at this super dusty alley and there were several other locals are waiting here already, including our Mongol Rally buddies Team Battlestar Galactica and Geoff the Lone Rider. 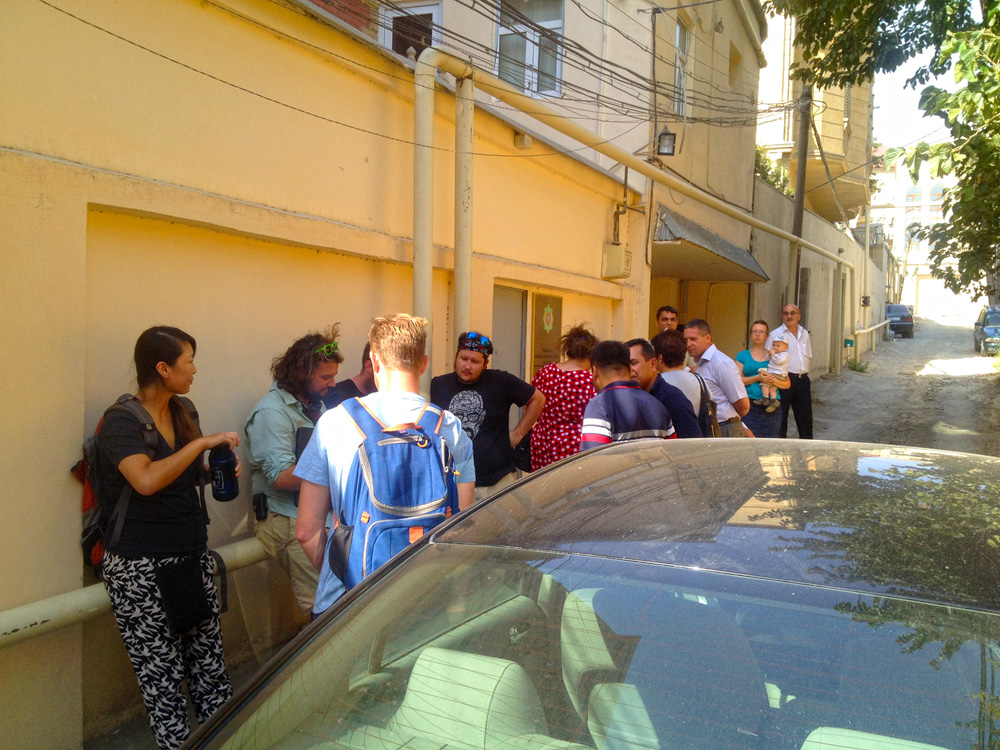 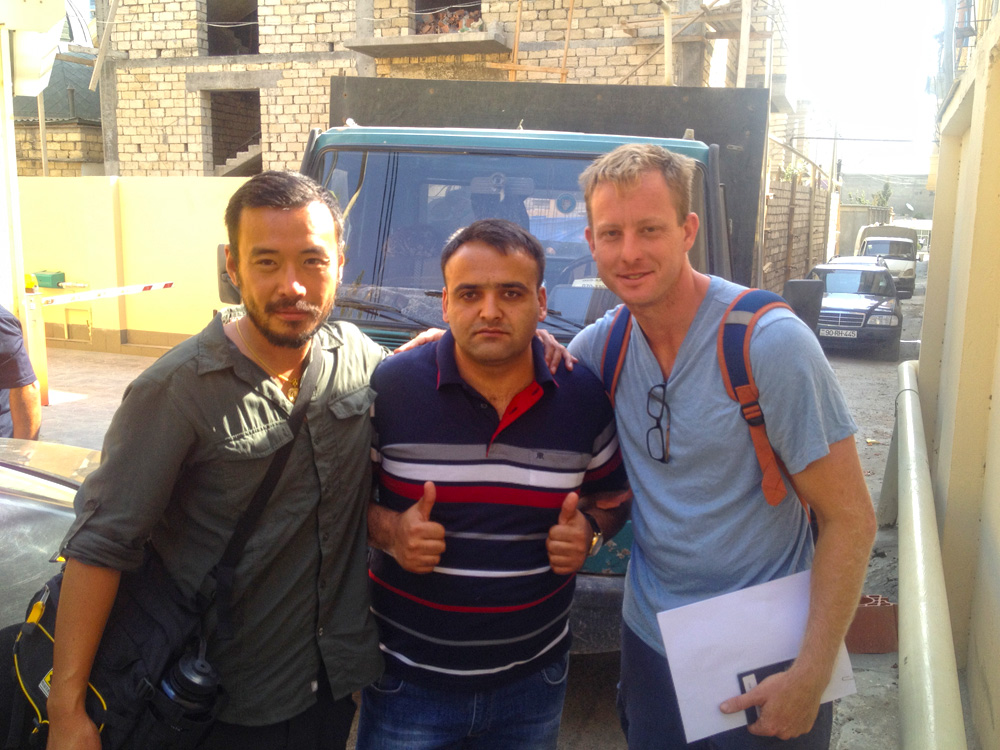 A guy named Ismyall approached us. We learned of him from the Mongol Rally Facebook closed group that he is the local fixer who helped other ralliers to get Turkmen visas and ferries tickets.

Ismyall charged $20 USD per person for the visa applications. Then after that another $20 to drive three of us to the ferry port to ask if there are any ferry we can board the same day.

For us we would rather spend the money and have extra time exploring the city, eat more local foods and interact with locals. We shaked hands for the deal and here is the process Ismyall took us through:

When we got back we explored the town a little bit. When we got back to the hotel we were delighted to see Team Battlestar Galactica and Geoff the Lone Rider arrived along with Ulaan On Your Feet. There were not enough rooms in the Guesthouse Inn. Young and I emptied out our private room to our fellow Mongol Ralliers so they could stay under the same roof as well. We moved back to the common room which had no private shower and bathroom. 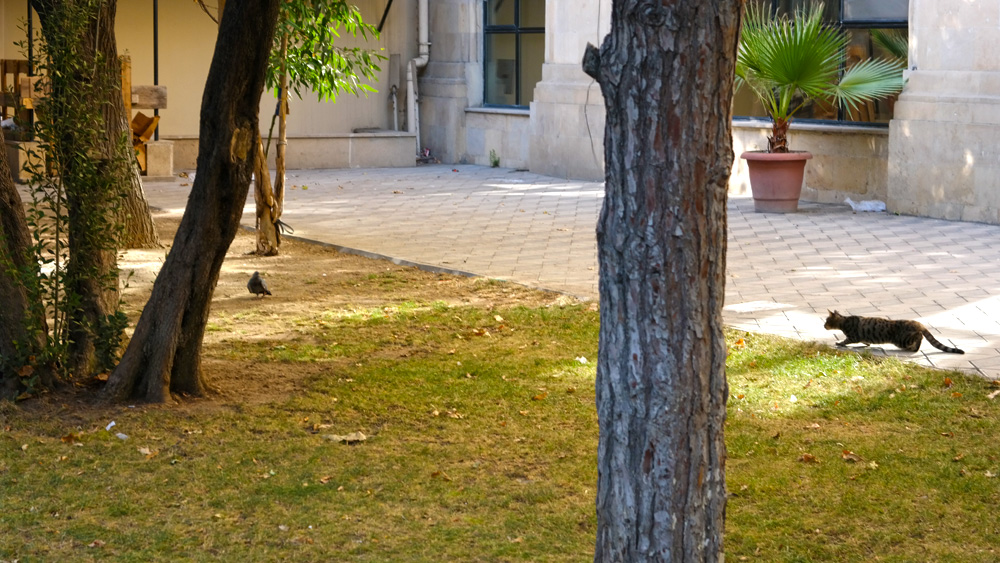 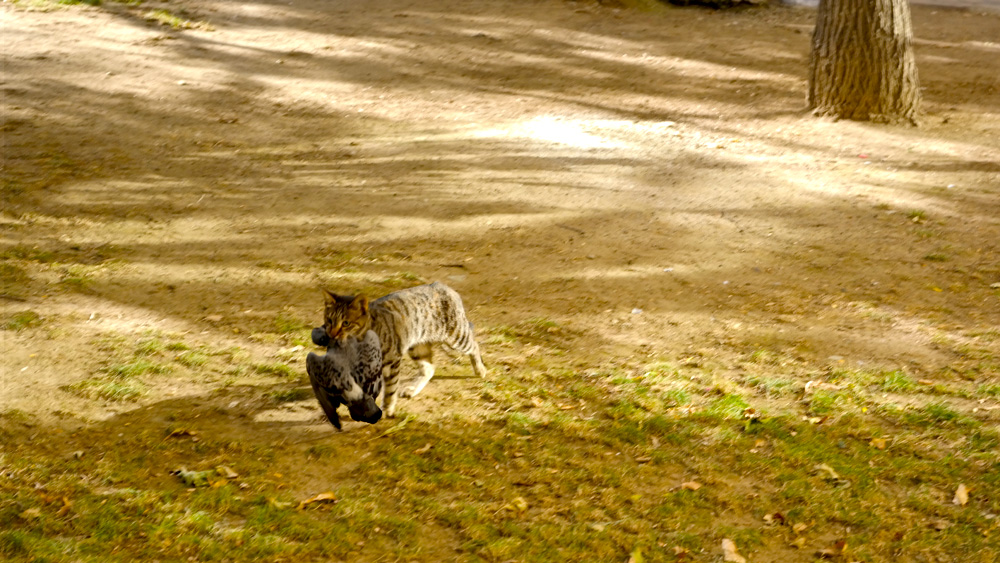 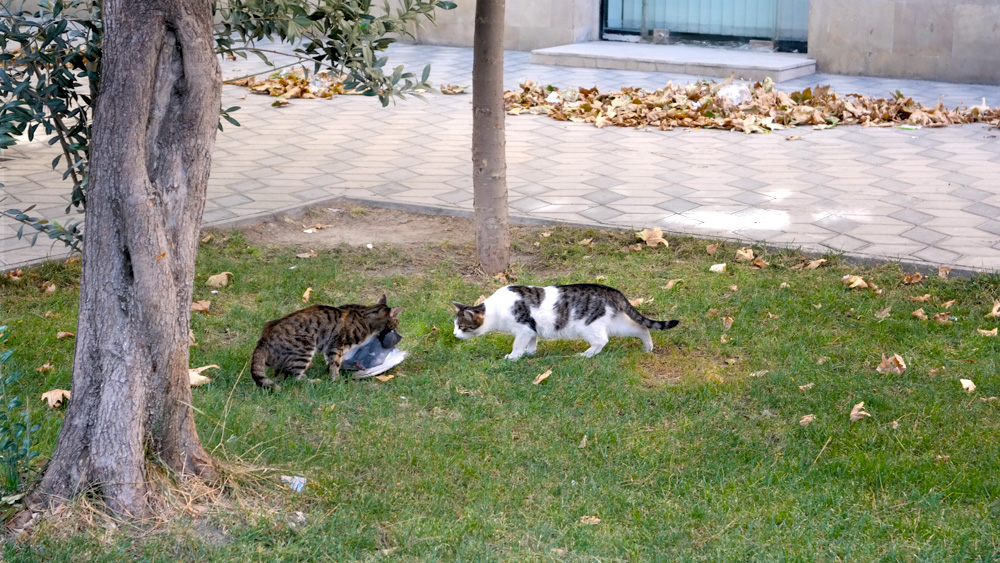 Azerbaijan Baku street cats are fierce ;-) What a great hunter! 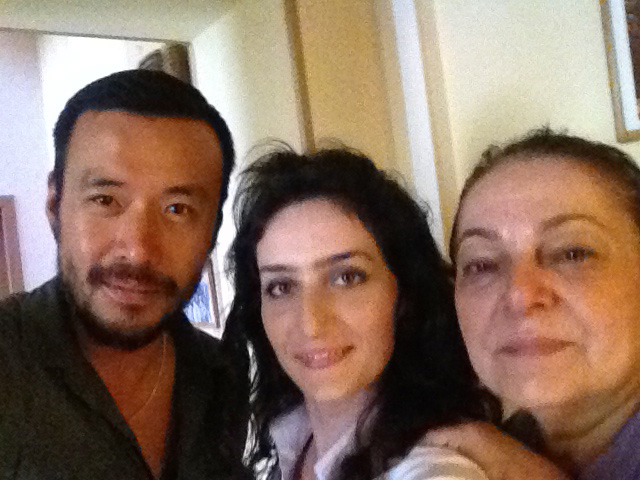 The sweet hotel receptionist Narghiz and the cleaning lady from the Guesthouse Inn in Baku.

We went for a walk and it was a great afternoon getting to know Tien and Andrew! 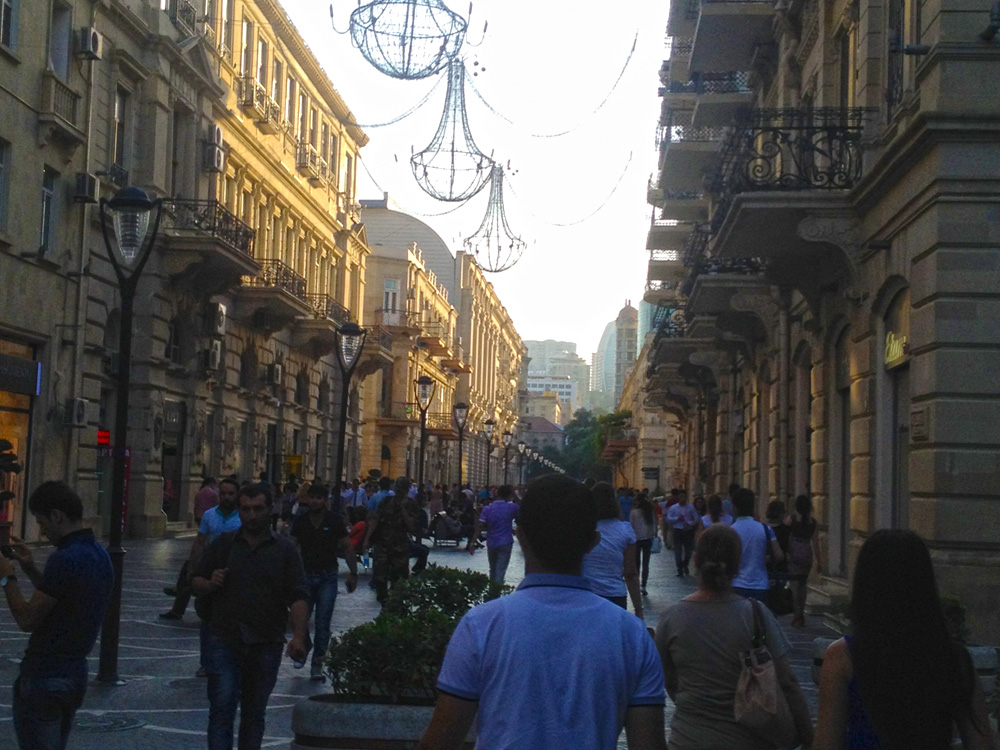 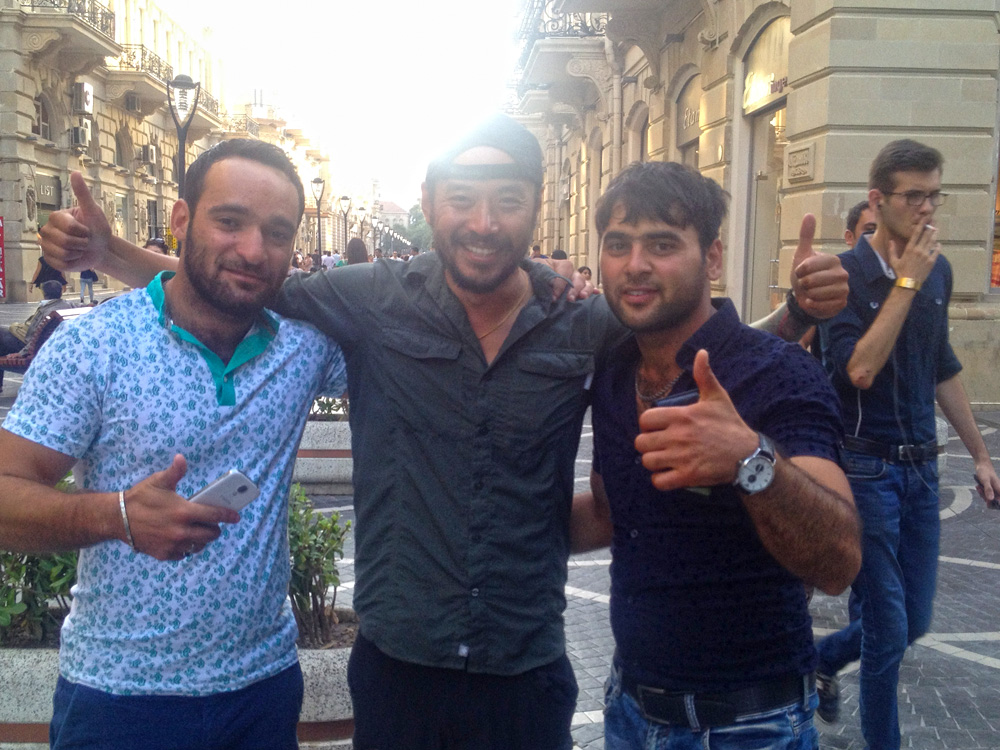 It was a fun day walking around this bustling city, and the local Baku people were super nice. These two Azerbaijanis stopped us and simply wanted to take picture with us ;-) 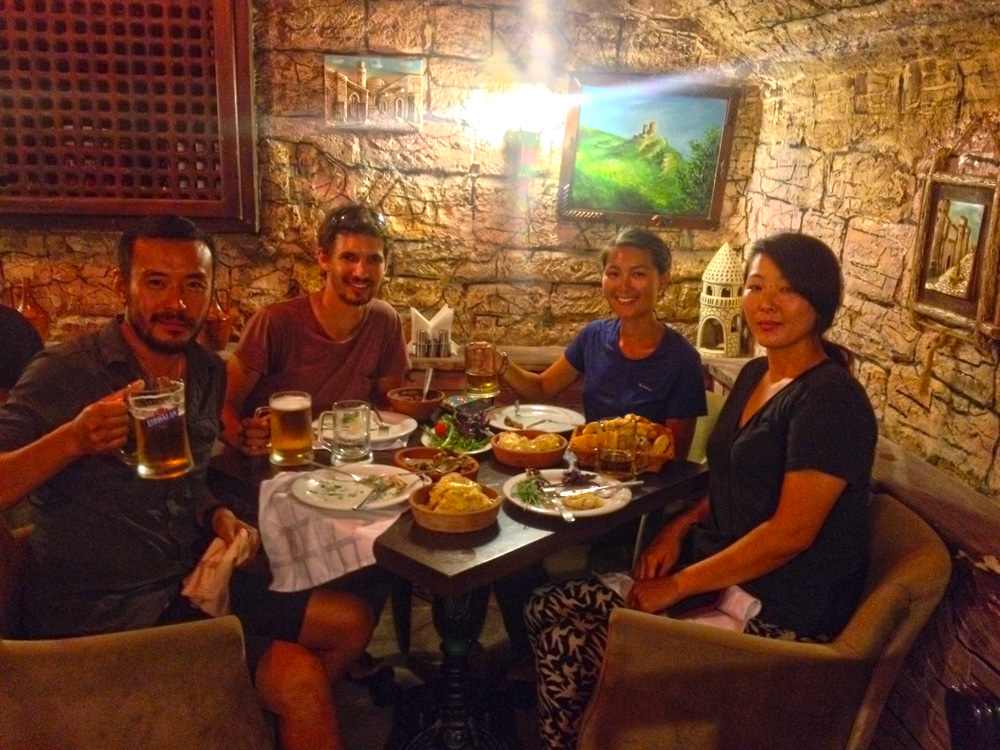 We went out with Tien and Andrew from Ulaan on Your Feet for a fancy dinner. We took Narghiz, our hotel receptionist’s recommendation, and went to a local restaurant called “Nargiz” ;-) It is located in downtown Fountains Square. They served Azerbaijani and Georgian cuisine. 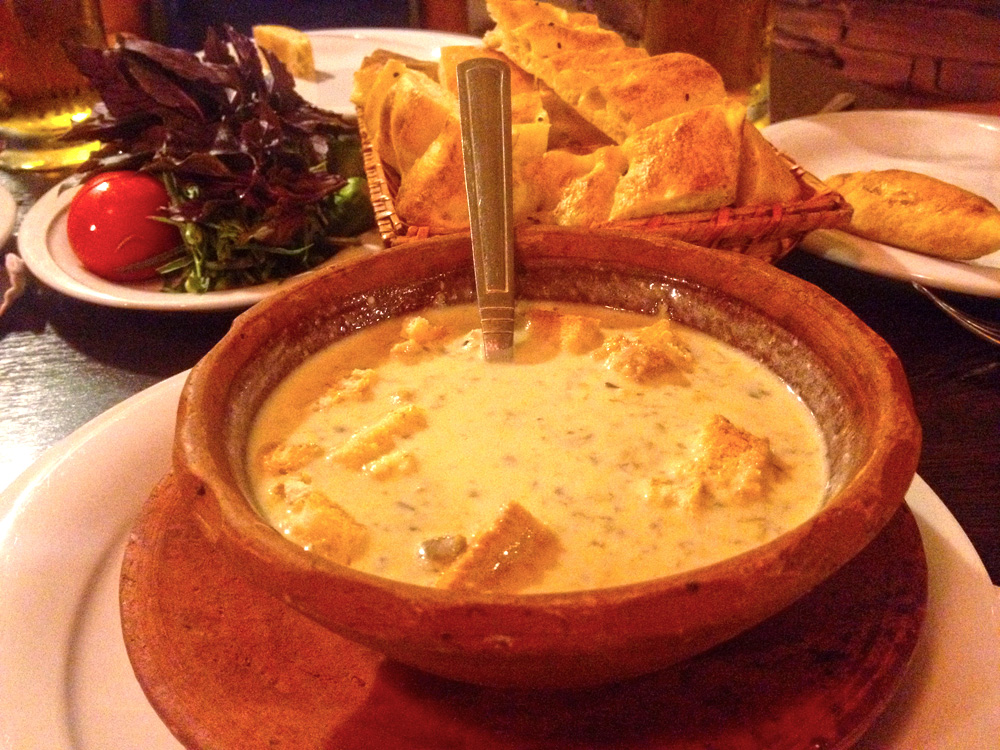 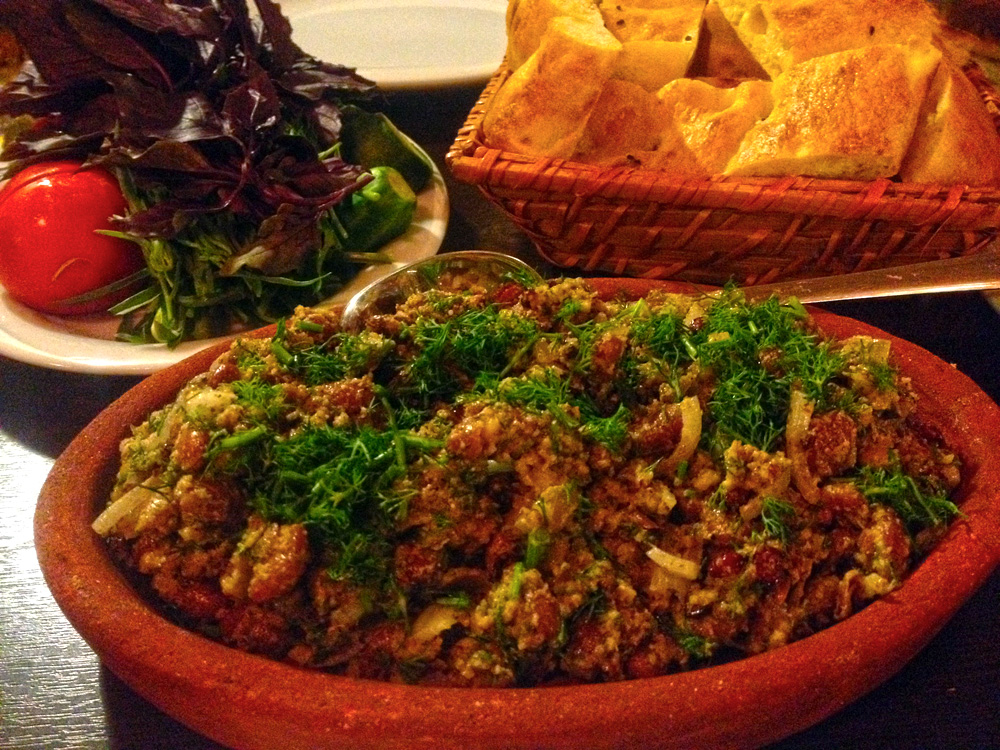 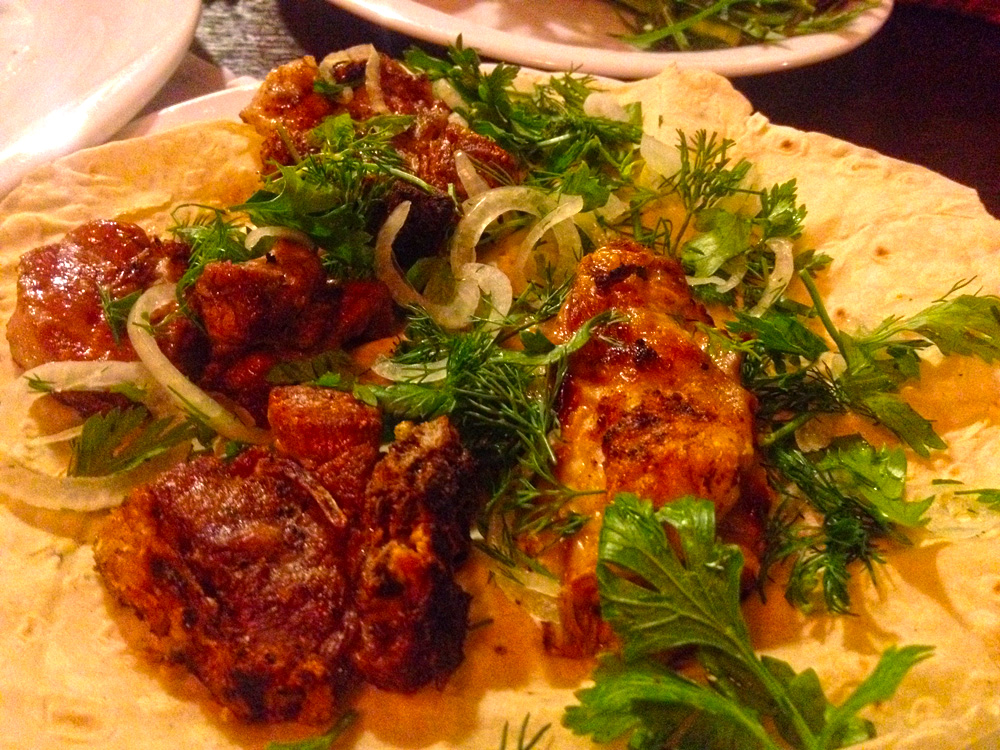 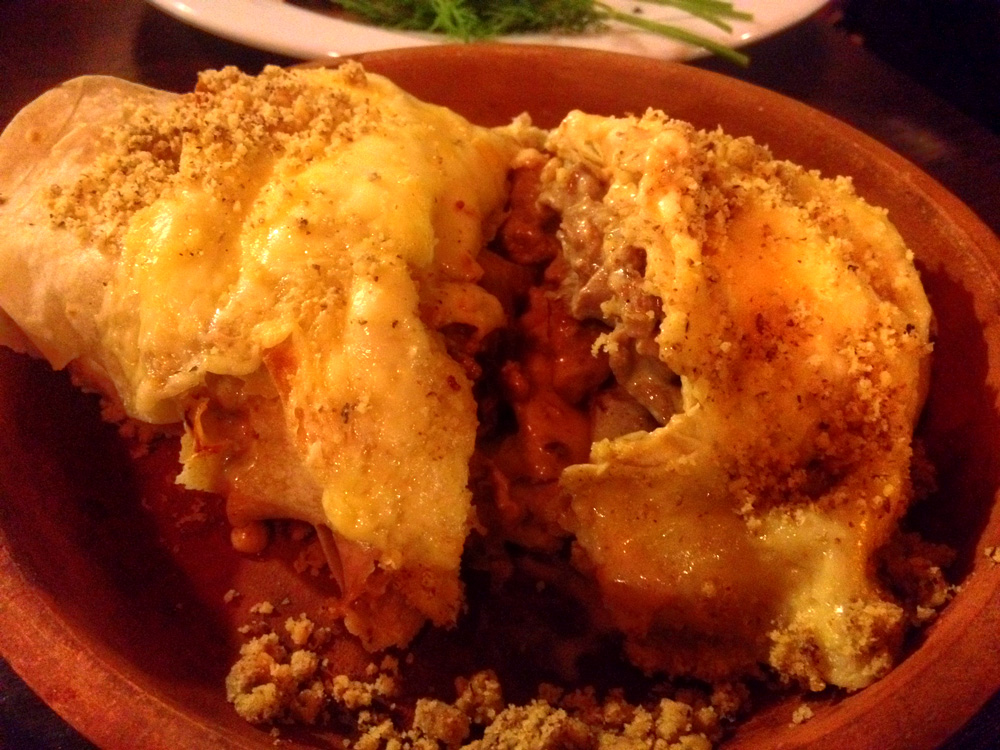 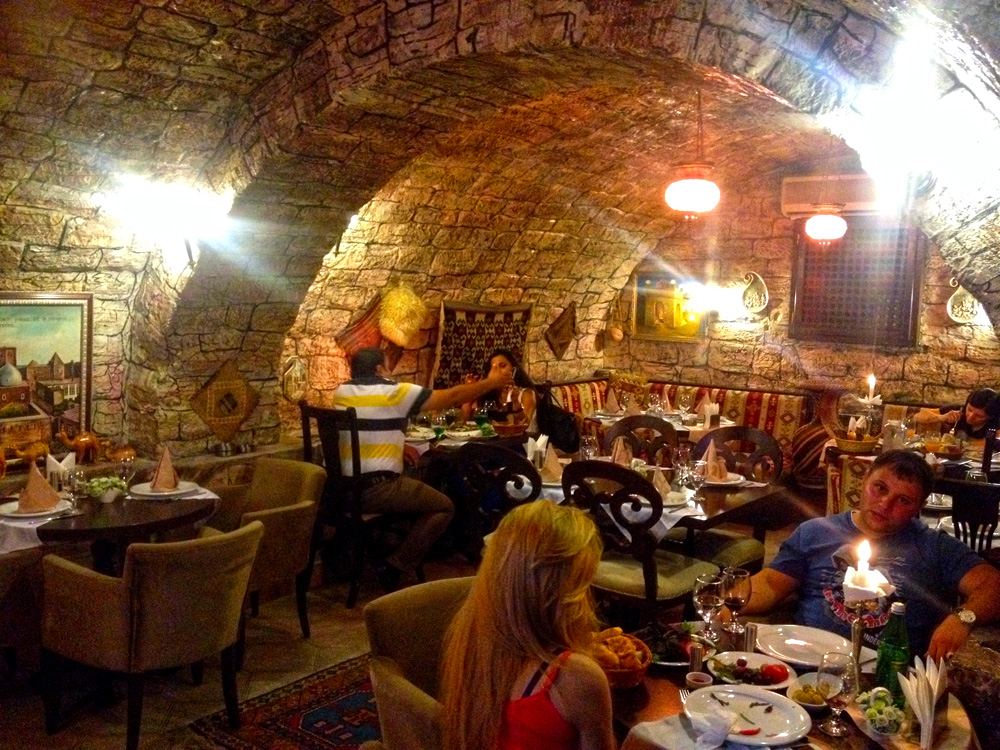 Nargiz was a very nice restaurant with beautiful decor. The family next table recommended the Red Beans and Walnut Salad and Creamy Mushroom soup so we got those. We also asked the waiter for his recommendations of dishes that represented Baku/ Azerbaijan the most. So here is the dish: Lamb wrapped in creamy sauce inside flatbread. If you know what this dish is called please let me know! “Sağ olun”- Thank You and goodbye in Azeri.

We were very grateful that every meal we had on the Mongol Rally are very delicious. “Dadlıdır” (Dod-lu-dur)- Tasty in Azeri ;-) 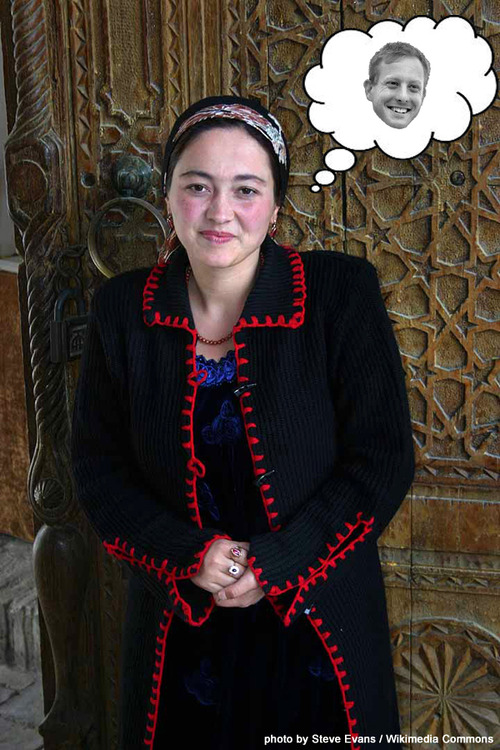 While we were having delicious Azerbaijani food, Graham was on his FUNraiser mission “GRAHAM DATES AN EURASIAN LADY“. We raised $286.00 through this mission for our charity Cool Earth.

Graham had been trying to find a Eurasian lady to date since Georgia but nothing worked out so far. Finally he used the app Tinder and found a very elegant and beautiful Azerbaijani lady in Baku. They went out for a romantic date in the City of Winds.

Check out what happened Graham wrote in great details about this date. The photograph above is our initial mission picture. Graham is a gentleman he respects the lady he dated so sorry guys no photo of Audrey Hepburn of Azerbaijan ;-)

After dinner I bought some more beer and shared with Team Battlestar Galactica. We played with a super cute street kitten. It was another great memorable Mongol Rally night! 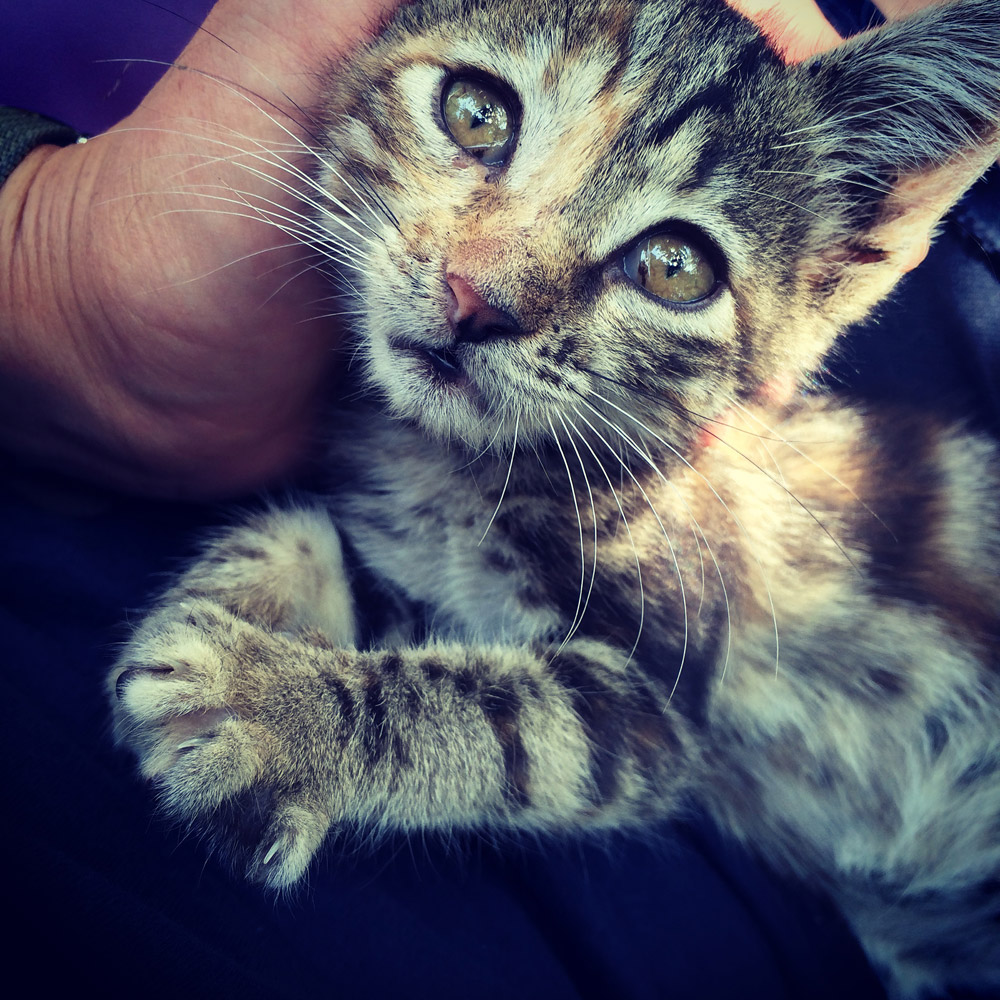