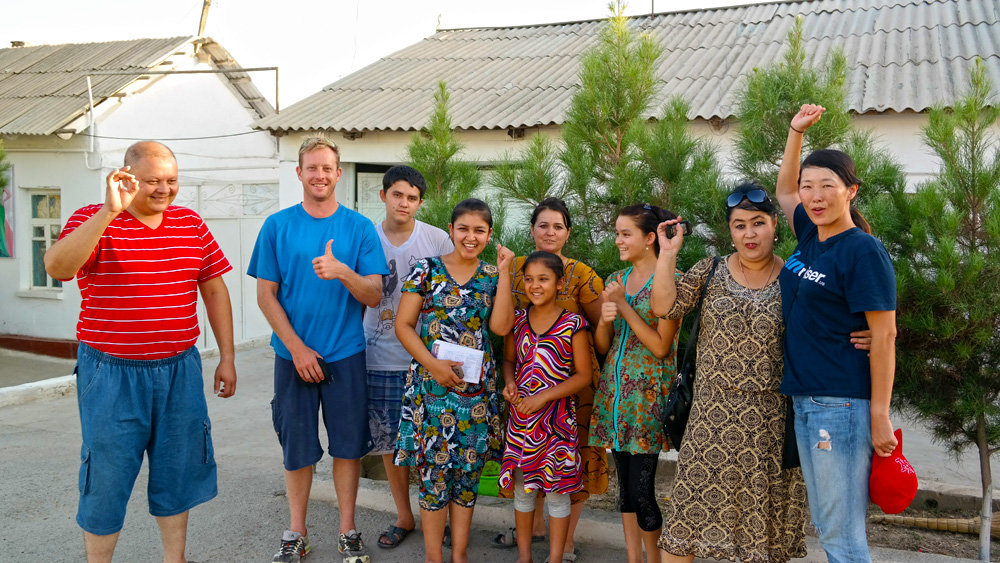 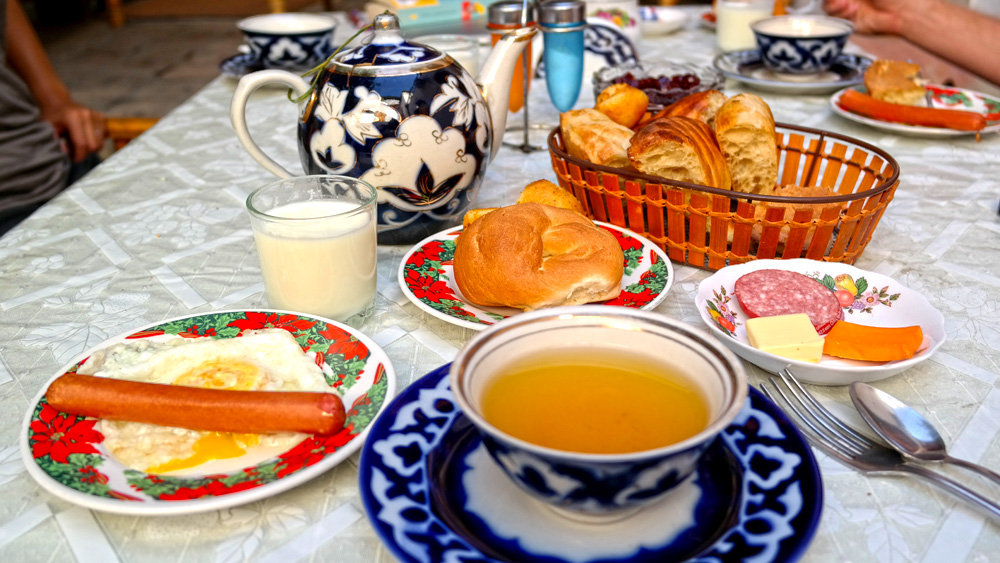 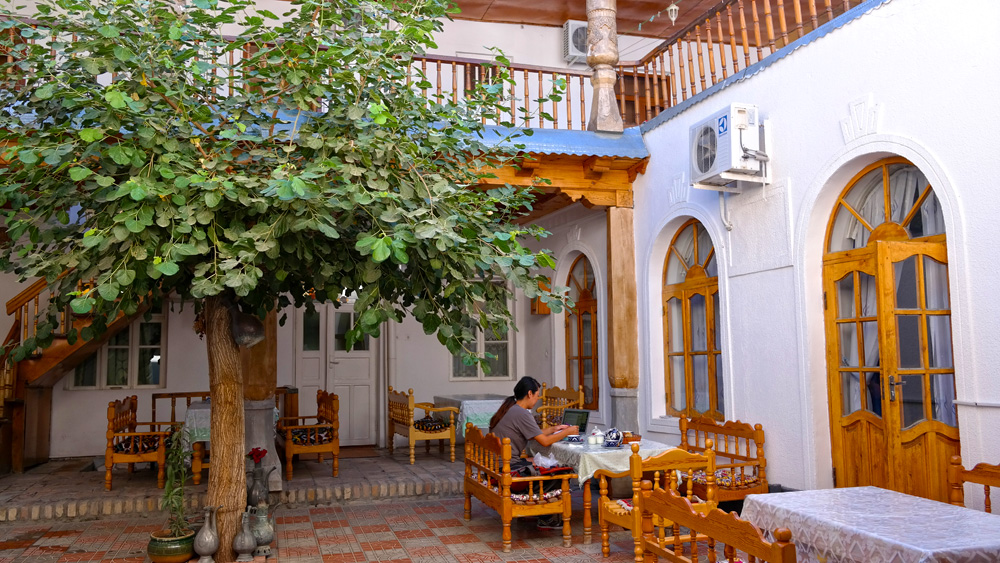 Last night stay in Nazira & Azizbek Hotel was excellent. After the complementary breakfast we went to the post office to complete our Mongol Rally FUNraiser mission: “POSTCARD FROM AN ANCIENT SILK ROAD CITY“. Here was our mission description:

If you pledge $10 you will received a postcard from one of the ancient Silk Road City in Uzbekistan! Each will be handwritten by us, we can even write you greetings in Uzbek language.

THANK YOU for your donations! Together we raised $222.00 for our charity Cool Earth! Here is the mission accomplished photo: 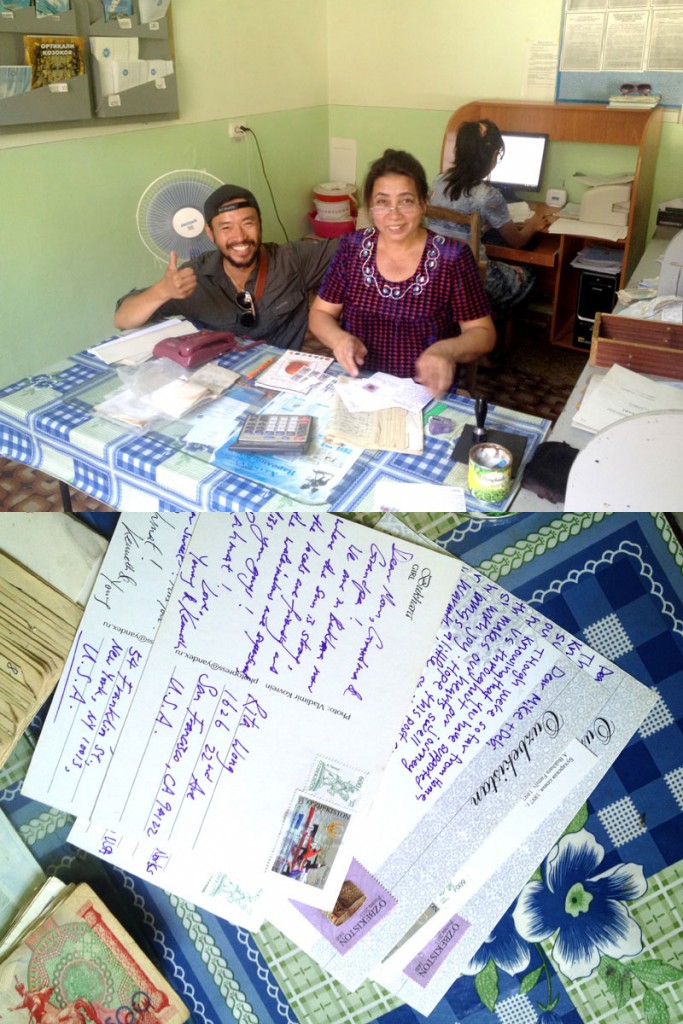 After that we explored the beautiful Bukhara in 100F degrees heat. 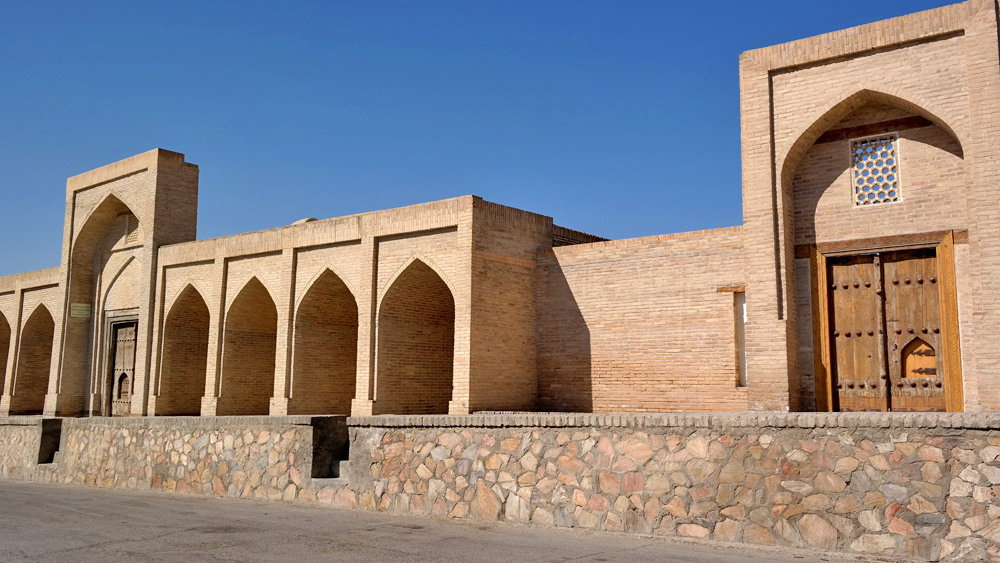 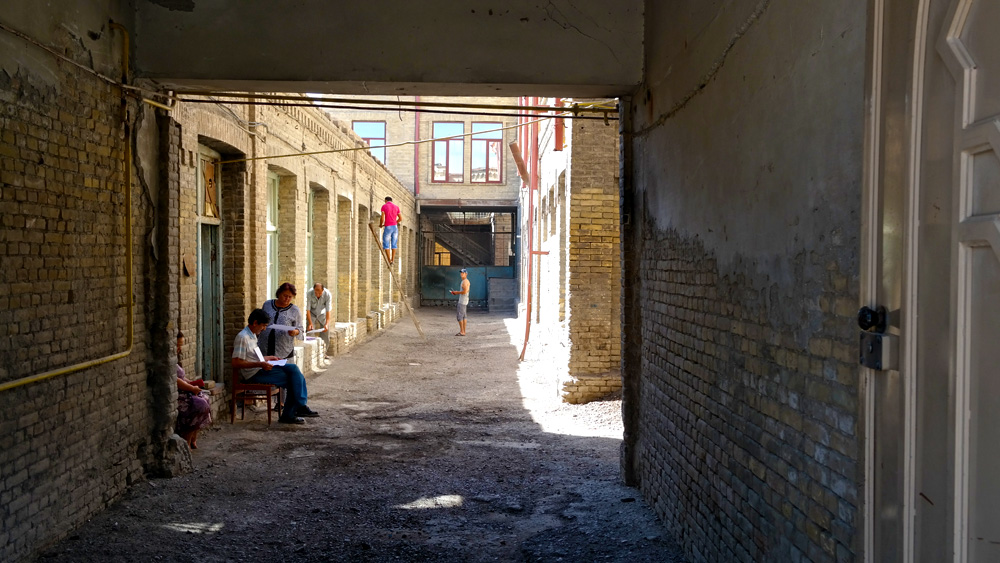 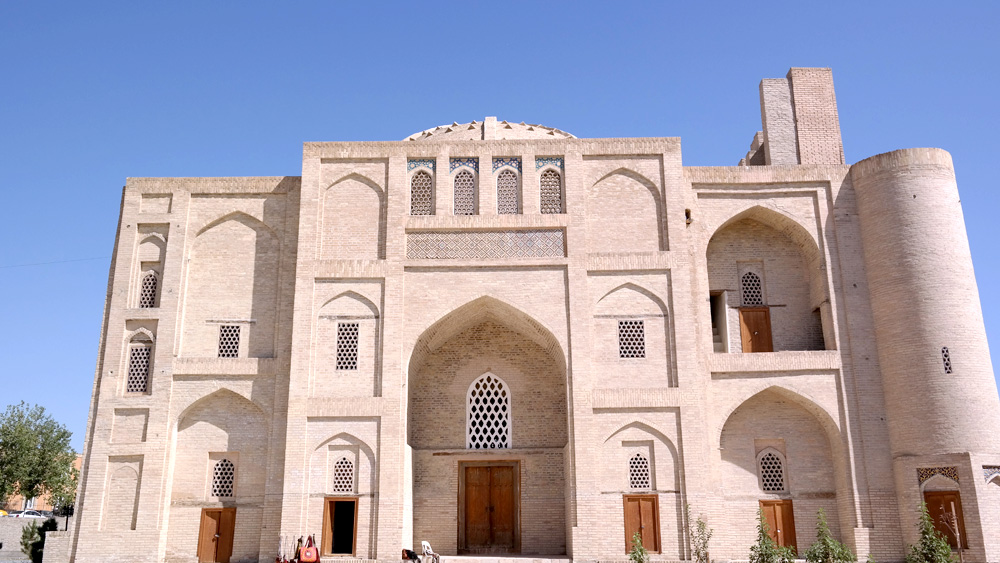 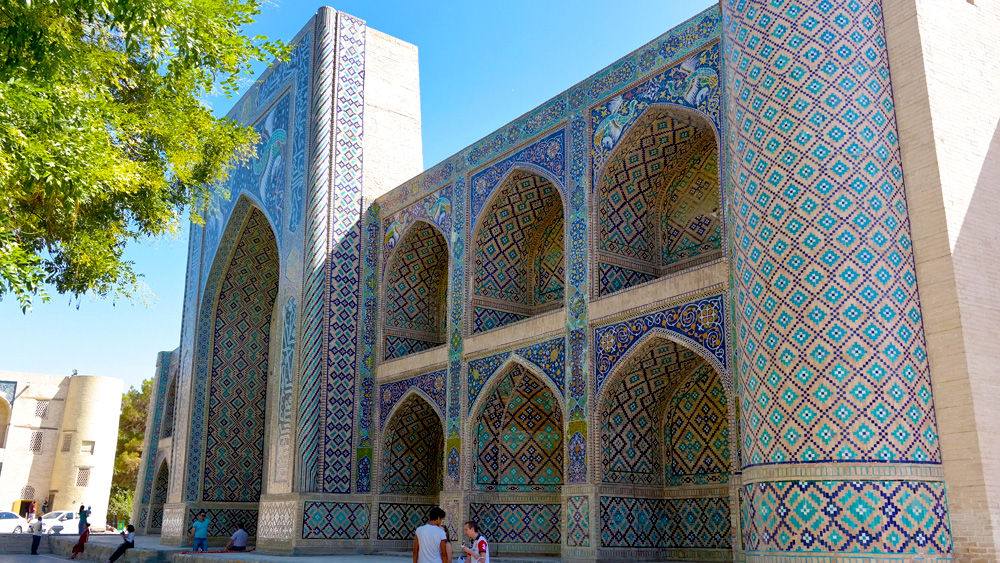 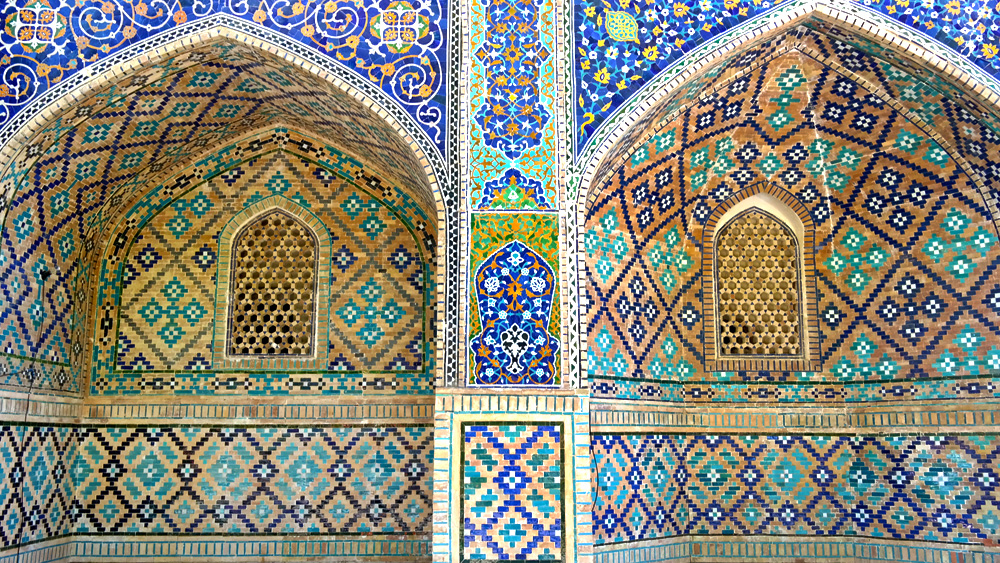 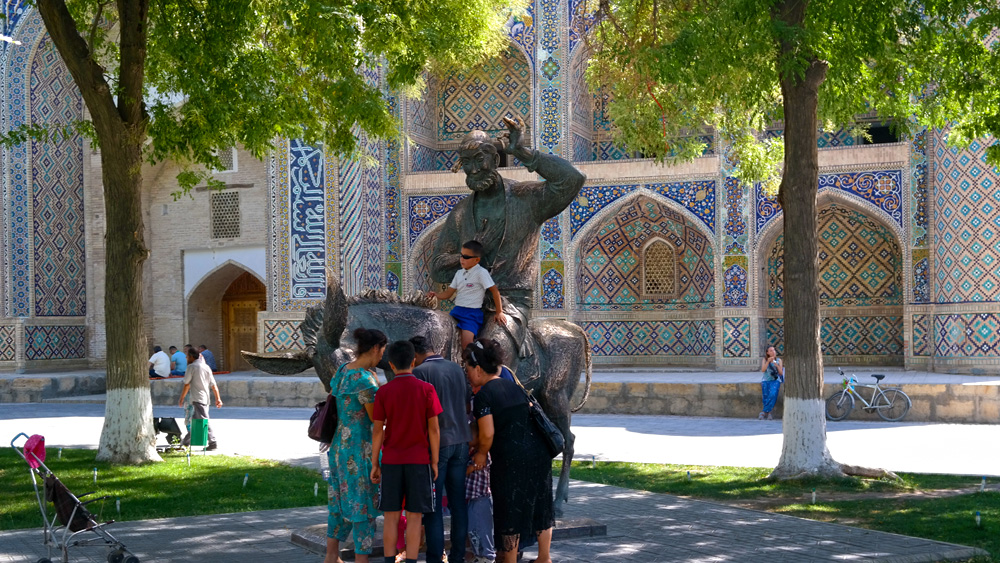 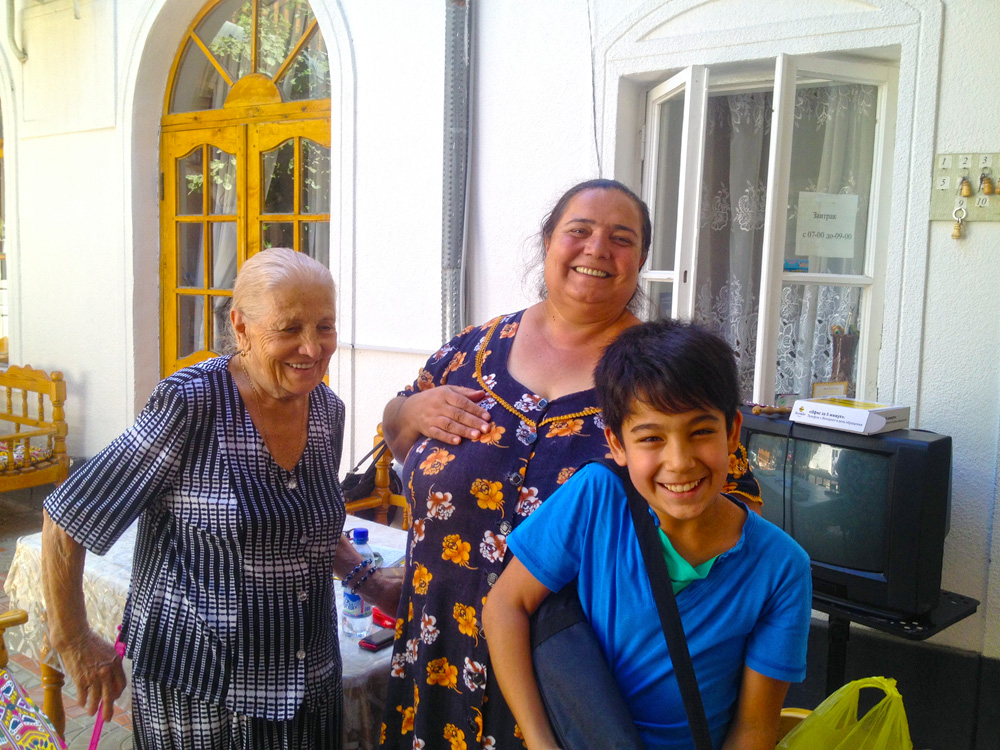 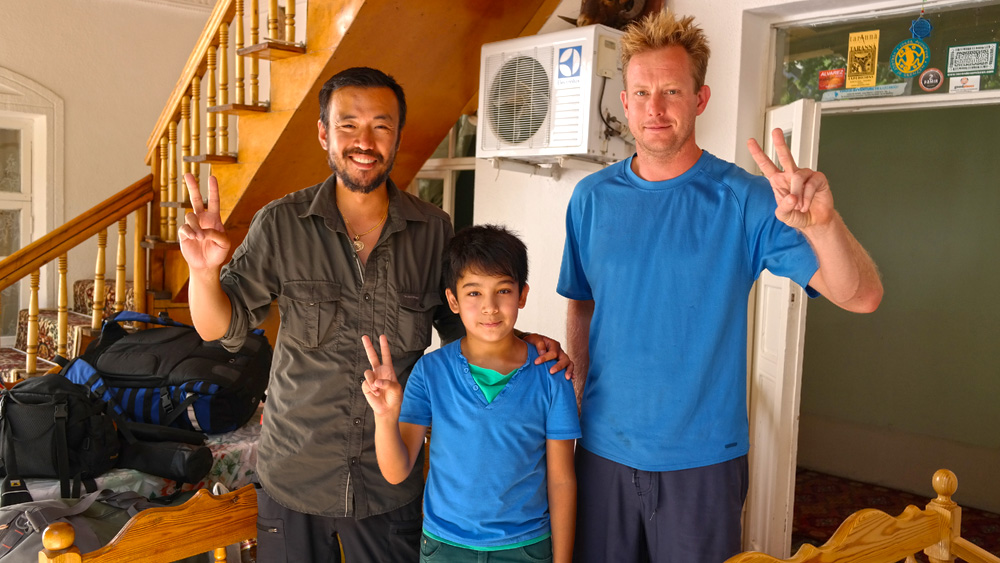 We checked out from Nazira & Azizbek Hotel at noon. We met the owners’ nephew Zarif, a super smart 14 years old Uzbek boy who spoke excellent English. He gave me a Bukhara poster, which I kept in my everyday labtop bag.

He was at the guesthouse helping out and he dreamt of visiting New York for the unlimited opportunities. With his wittiness, confident and outgoing character I was 100% sure that he would be successful anywhere in the world, be it New York, London or Shanghai.

Here we wished you Zarif good luck and maybe one day you will come and visit us in Brooklyn ;-) 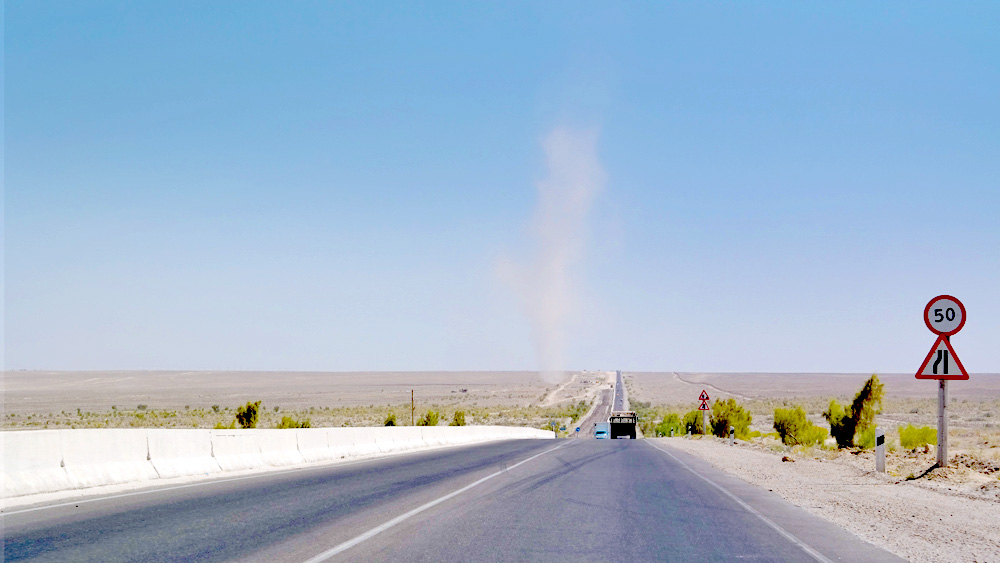 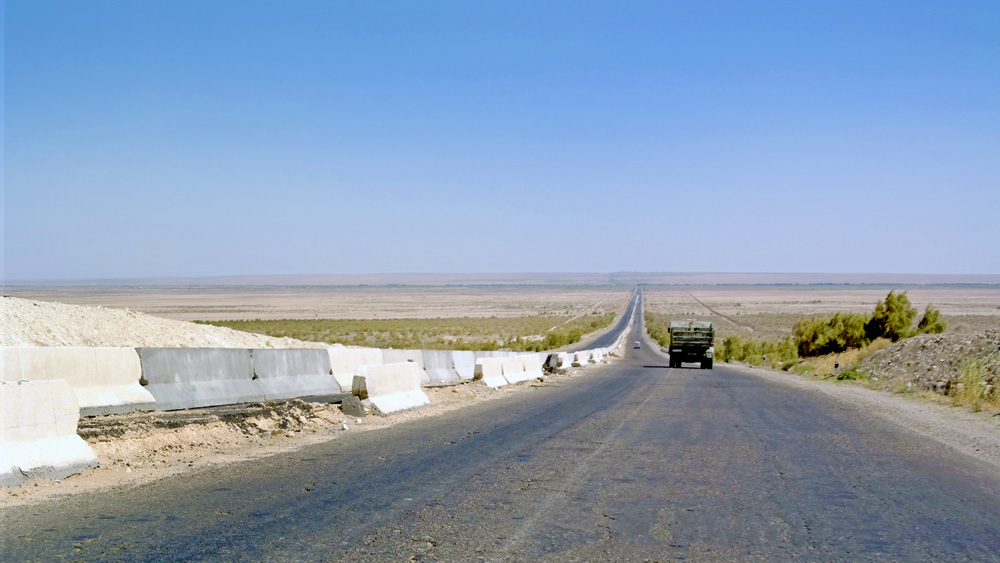 No Gas in Uzbekistan!

We ended up leaving Bukhara around 2pm and aimed for Dushanbe. We met an Australian couples who motobiked from Russia across Central Asia to Dubai.

They told us there was a huge oil (Benzin) shortage in Uzbekistan and there was only one gas station opened between Bukhara and Sarmarkand. Most of the cars in Uzbek were alredy converted into Metan Propane Gas.

Driving towards Qarshi there was no benzin at all. We kept going station after staion with no luck. We finally managed to find a gas station that sells Benzin. The owner’s friend tried to jack up an extra $5 USD because we were foreigners but we stand firmed with the original price $30 USD (for a Full Tank). We also heard that there were lots of black market benzin for sale. The shiny yellow ones are the best with the highest Octane 95.

Also en route we met a super nice truck driver, he gave us a watermelon as a gift. Too bad he left right after I didn’t got a chance to snap a picture with him.

Qarshi- The City with Friendly Peoples 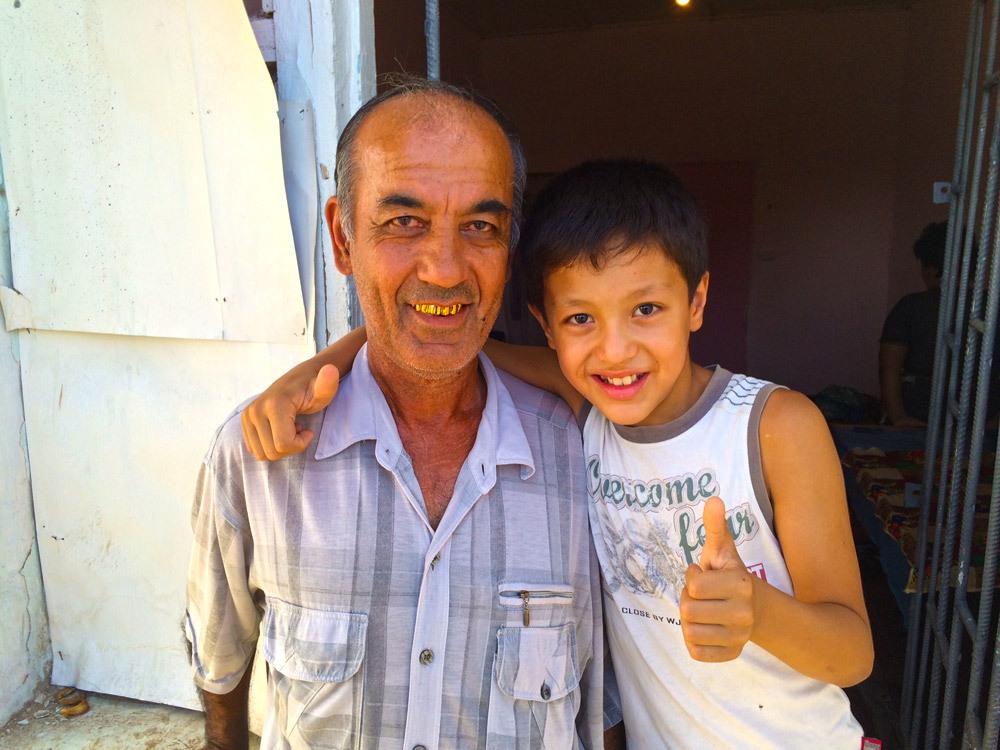 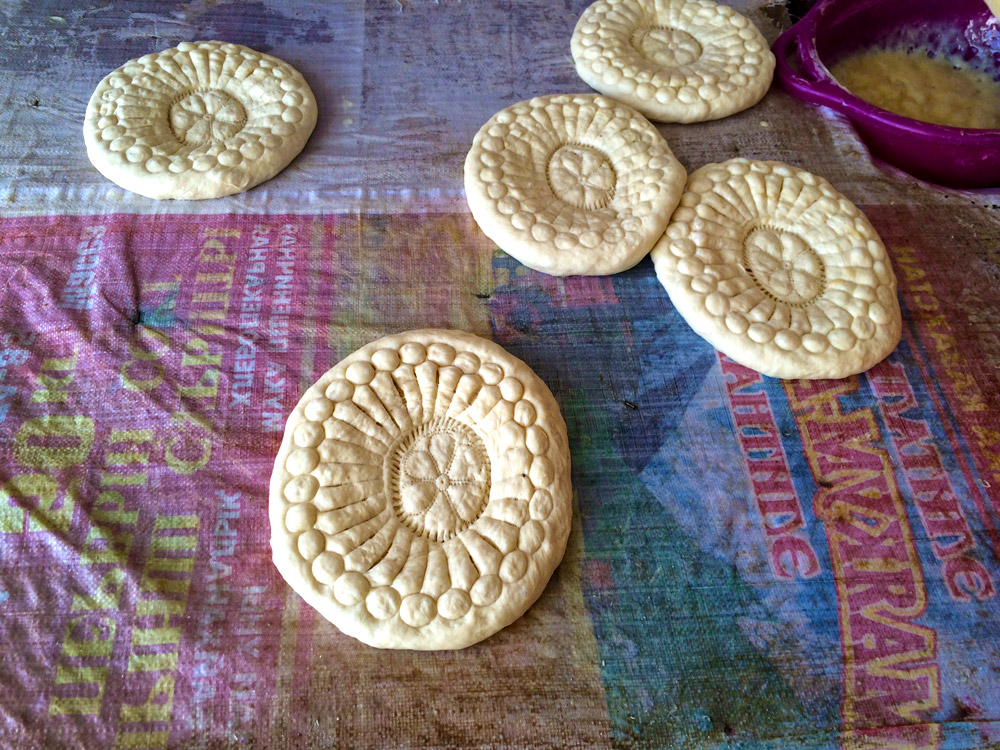 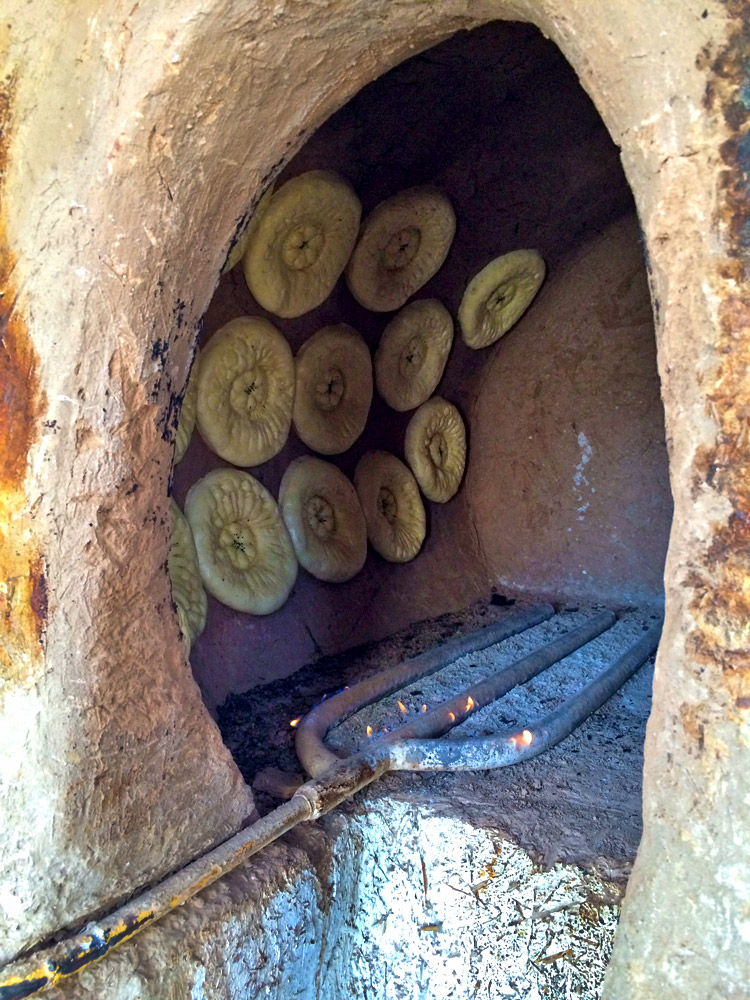 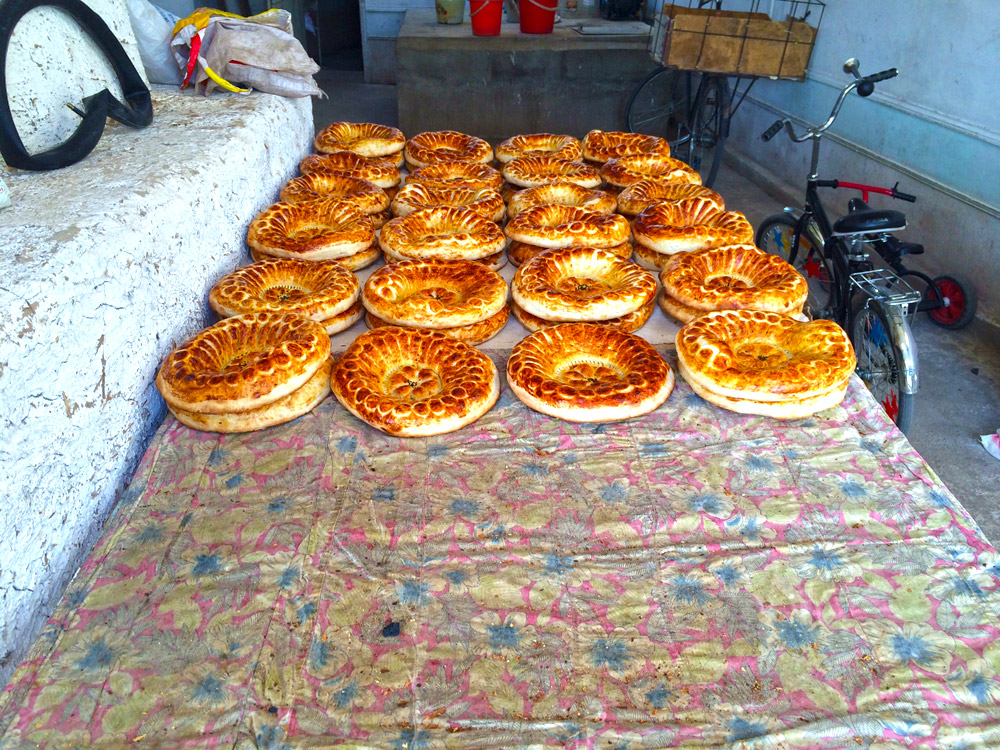 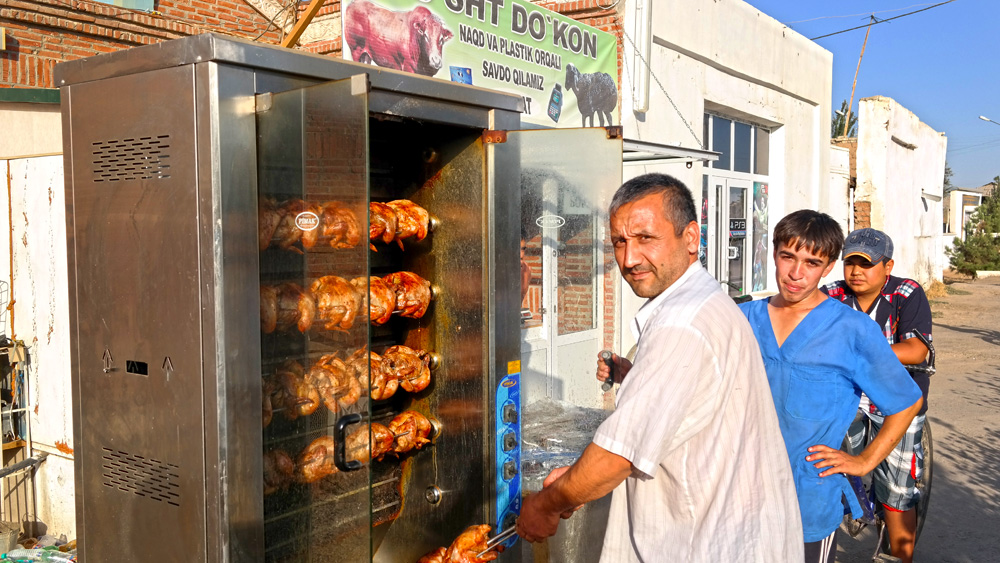 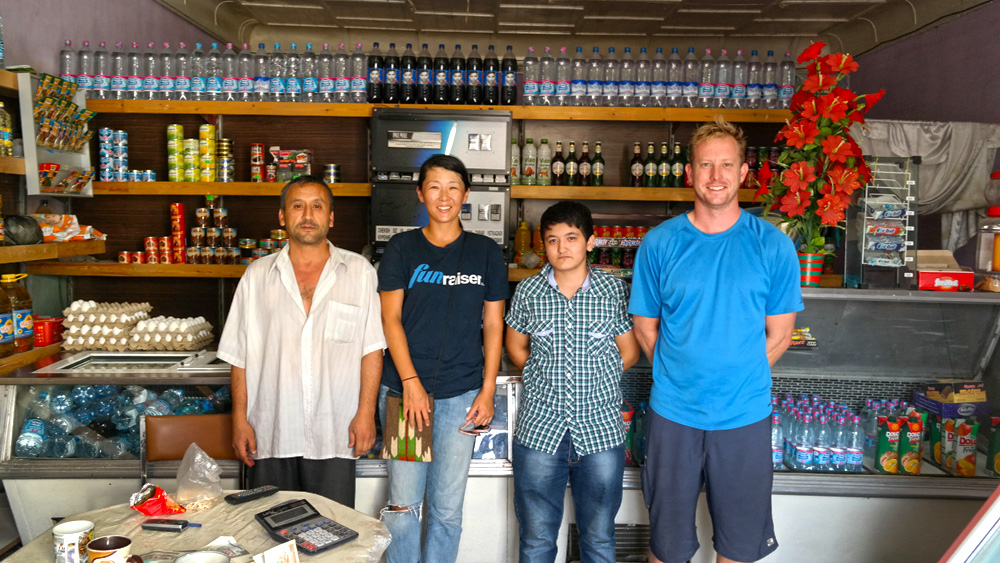 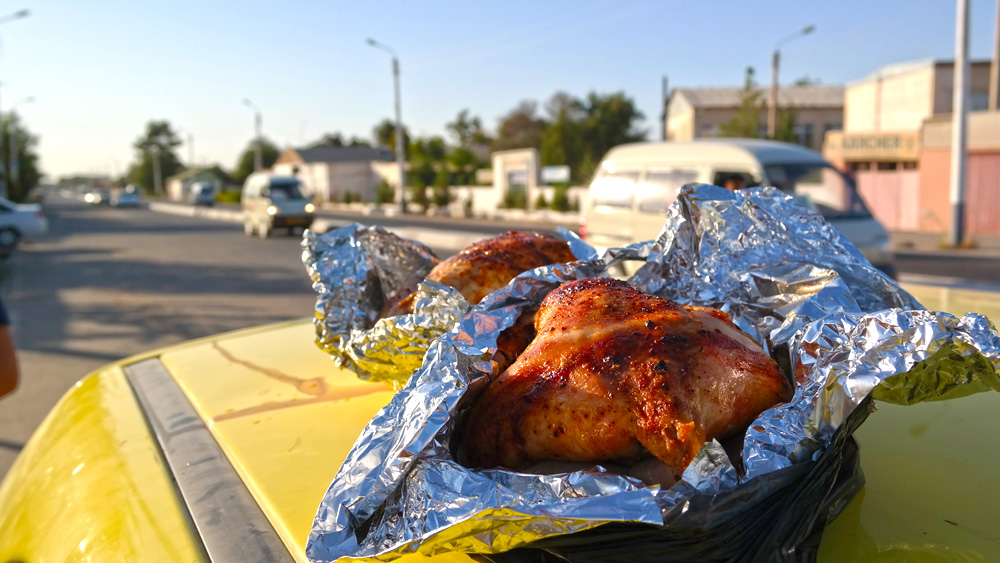 While we drove through Qarshi we saw a rotisseries chicken stand. We were so hungry we stopped and get two chickens for 50,000 Uzbekistan Soms (around $20.50 USD). There was no place to eat and we ended up using the rooftop as our dining table.

While we were eating we parked in front of a beautiful family’s house, and the entire family came out and greeted us with sliced watermelon! 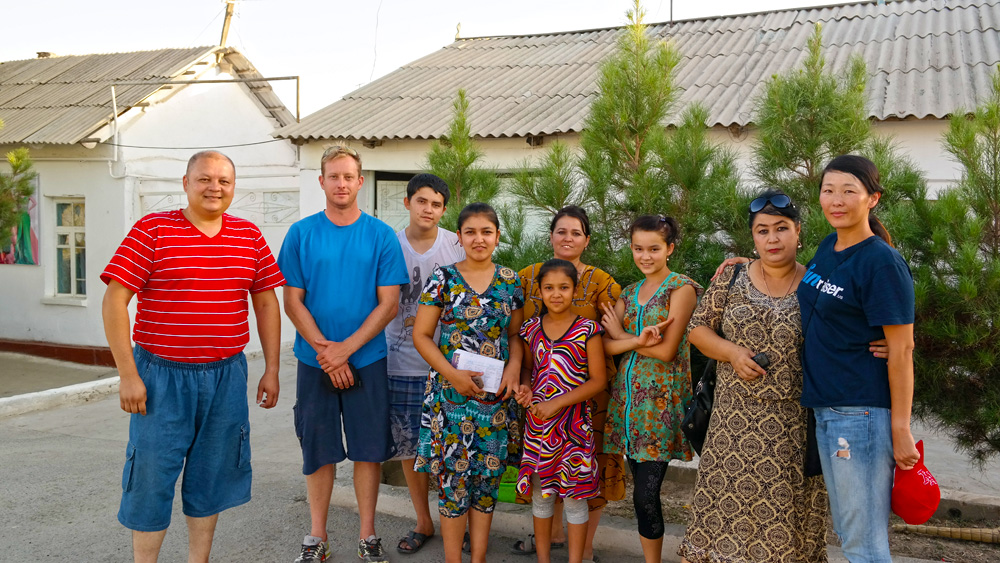 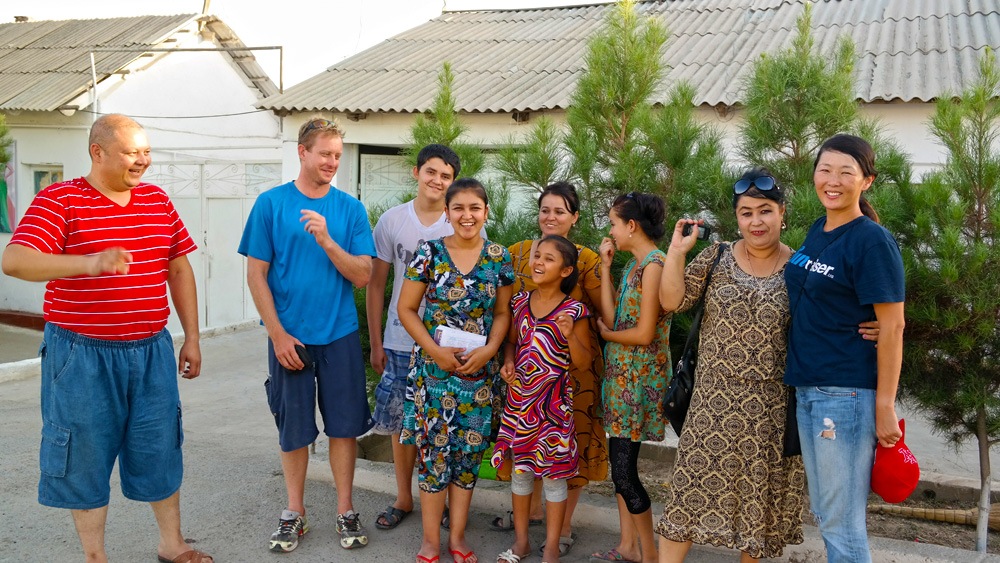 We parked right in front of this family home and then everybody came out and offered us watermelons, tea and and invited us inside their house to stay.

In America if the similar situation happened the reaction wiould be completly opposite. The family would probably came out and yelled “What are you doing? Get off my property or I will call the cops!”

But in Uzbekistan people really opened their arms and welcomed us. We politely declined to get inside their house since we were way behind out schedule with a tight time crunch drive ahead.

The family man was an Endocronlogist. He learned that Graham had diabetes and offered insulins and diabetic supplies to Graham.

It was very hard to say goodbye. Uzbeks hospitality restored my humanity bits by bits. Why the rat race in New York? I left my hearts in Uzbekistan. 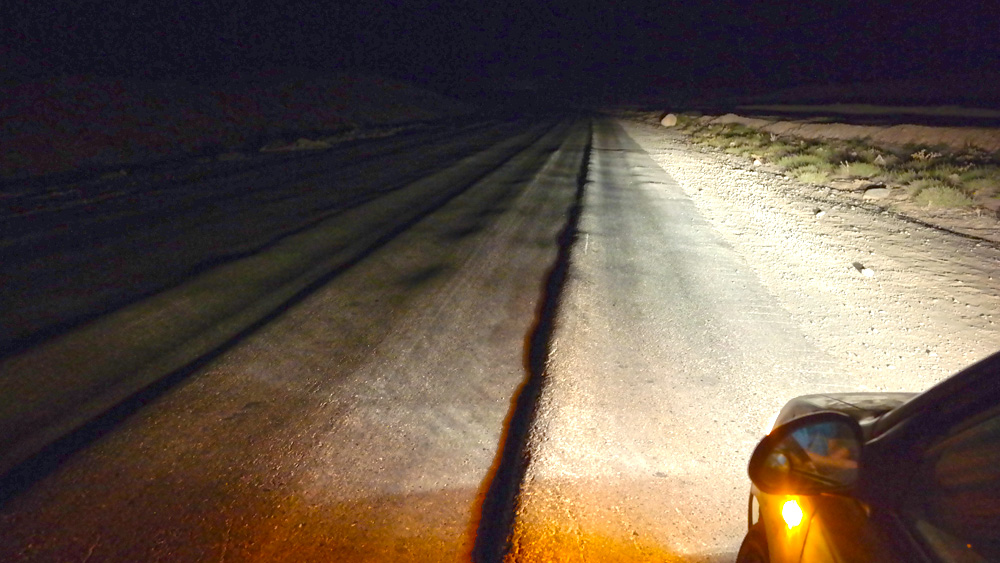 We then attempted another all night drive. This one was an absolute nightmare. The road from Koashina to Termez were the most challenging so far in our Mongol Rally trip.

We were not talking potholes on a paved road, we were talking completely ripped up roads that we could only drove 5-10 mph. If we were lucky we got the paved roads that had multiple ridges at least 1 foot high.

On top of it I got a bad diarrhea. Imagine trying to hold it on the most bumpiest ride you have ever experience for 12 hours. We had to stop multiple times you know what i mean ;-)

This was definitely the worst road we had driven on so far, much worst then the Turkmenistan. Graham was the champion tonight he droves until 4am. We slept in the car for two hours, then again sailed on towards Tajikistan.