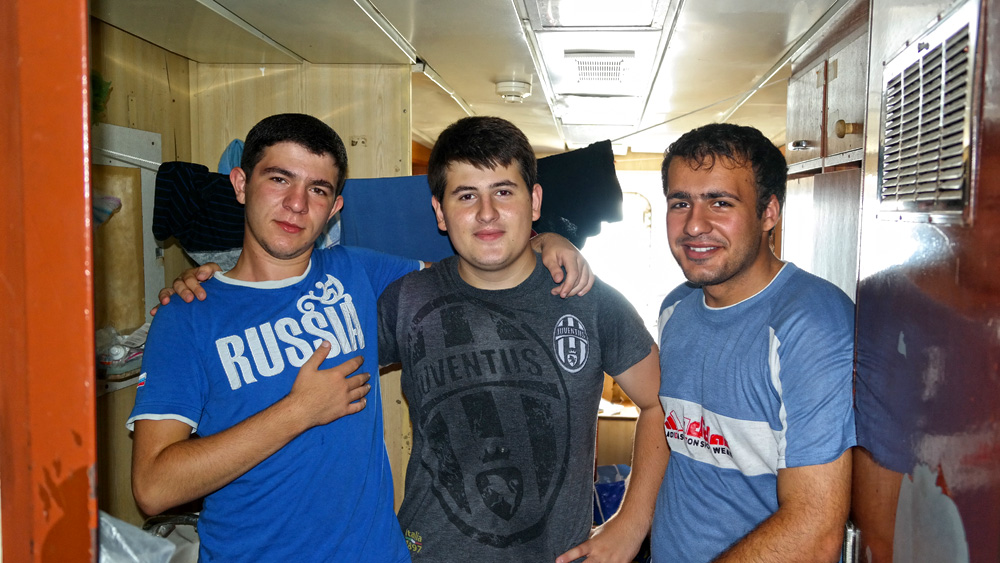 Sleeping on the deck of Caspian Sea Ferry

Last night we kept waking up due to the strong wind and the diesel smoke from the engine. Last night I saw a series of well spaced oil rigs on Caspian Sea lining the horizon, reminded me of a scene from Nausicaä of the Valley of the Wind by Hayao Miyazaki. It was definitely a memorable Mongol Rally moment. 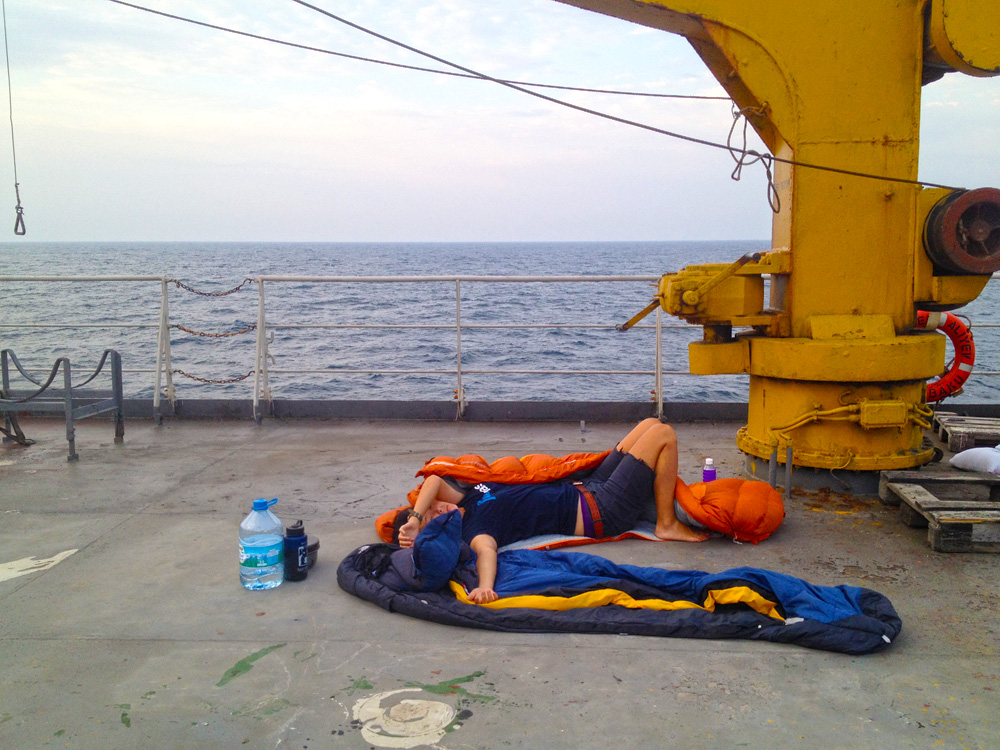 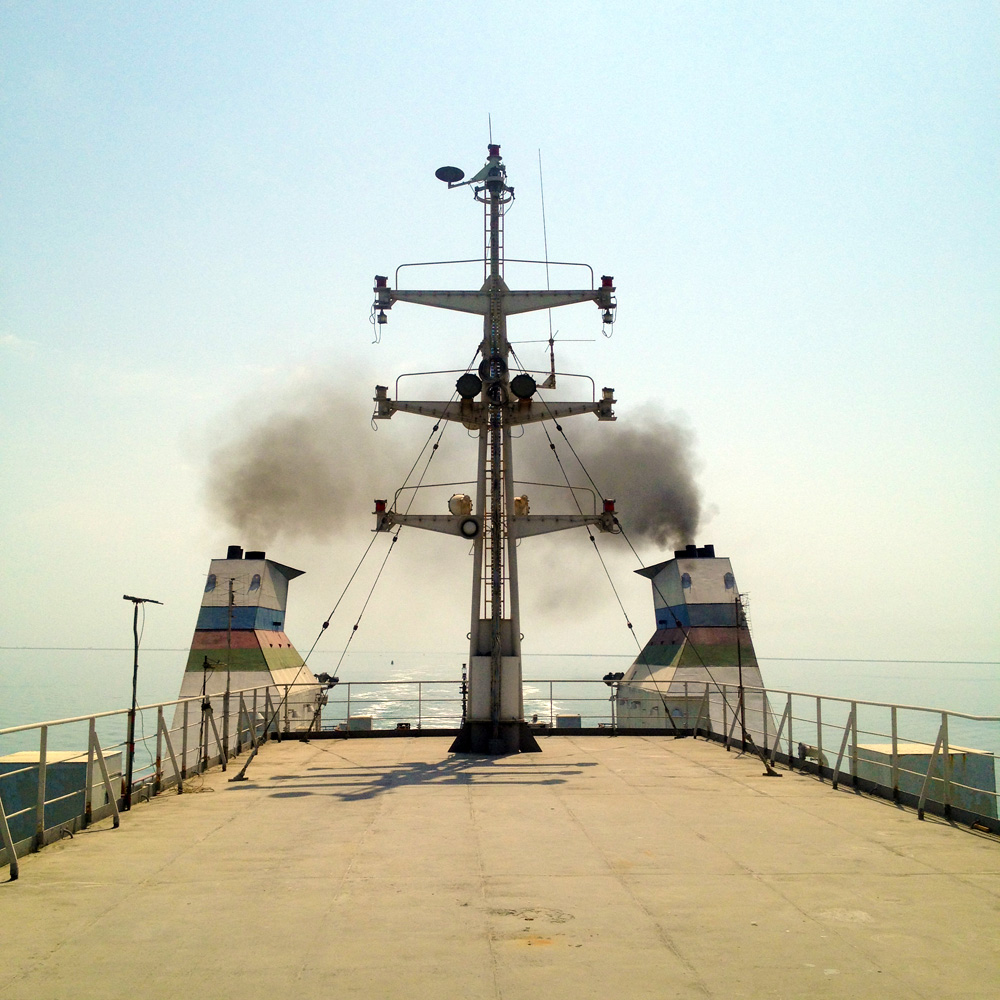 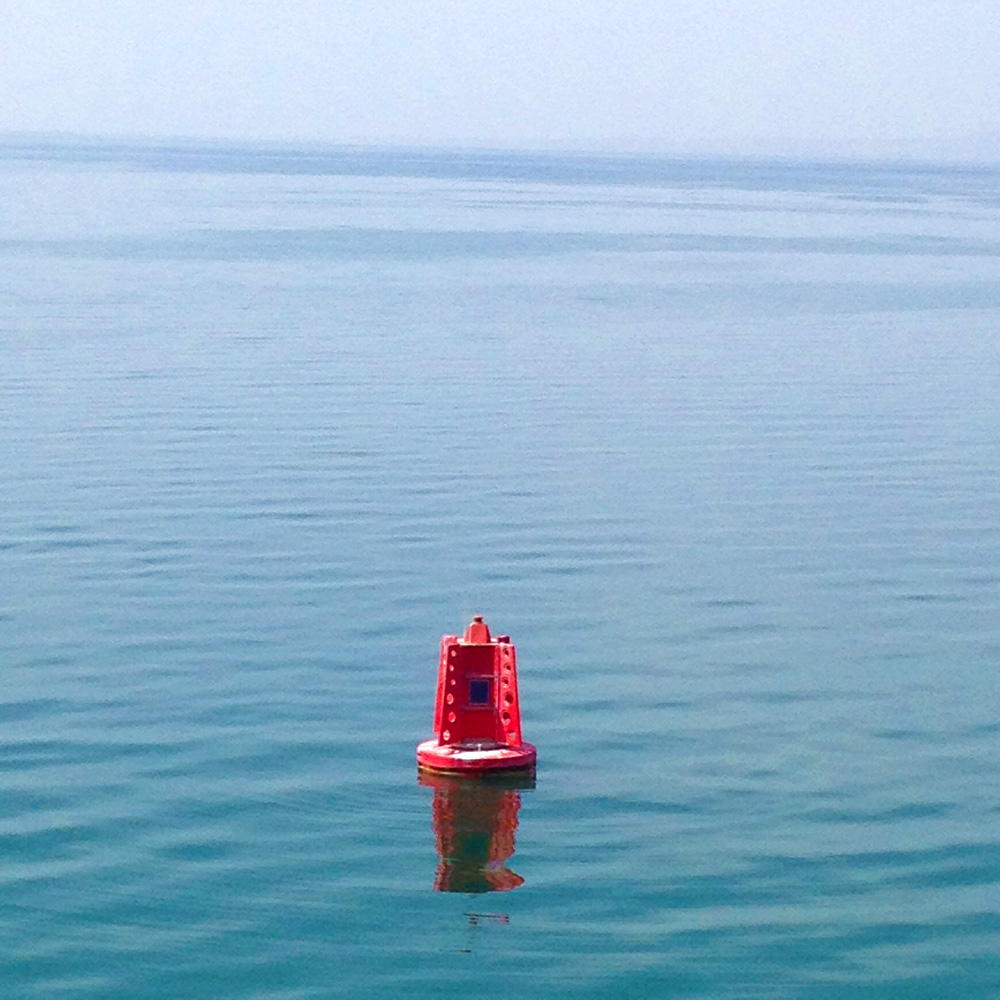 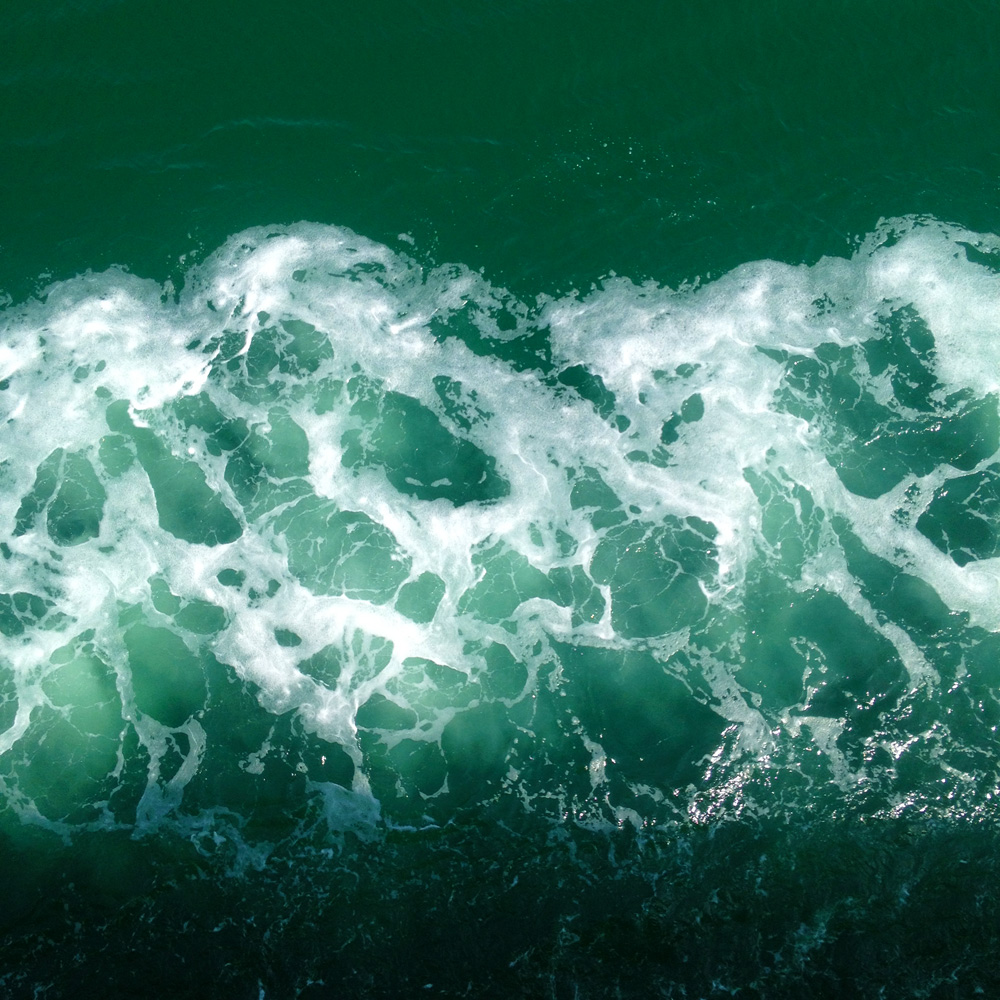 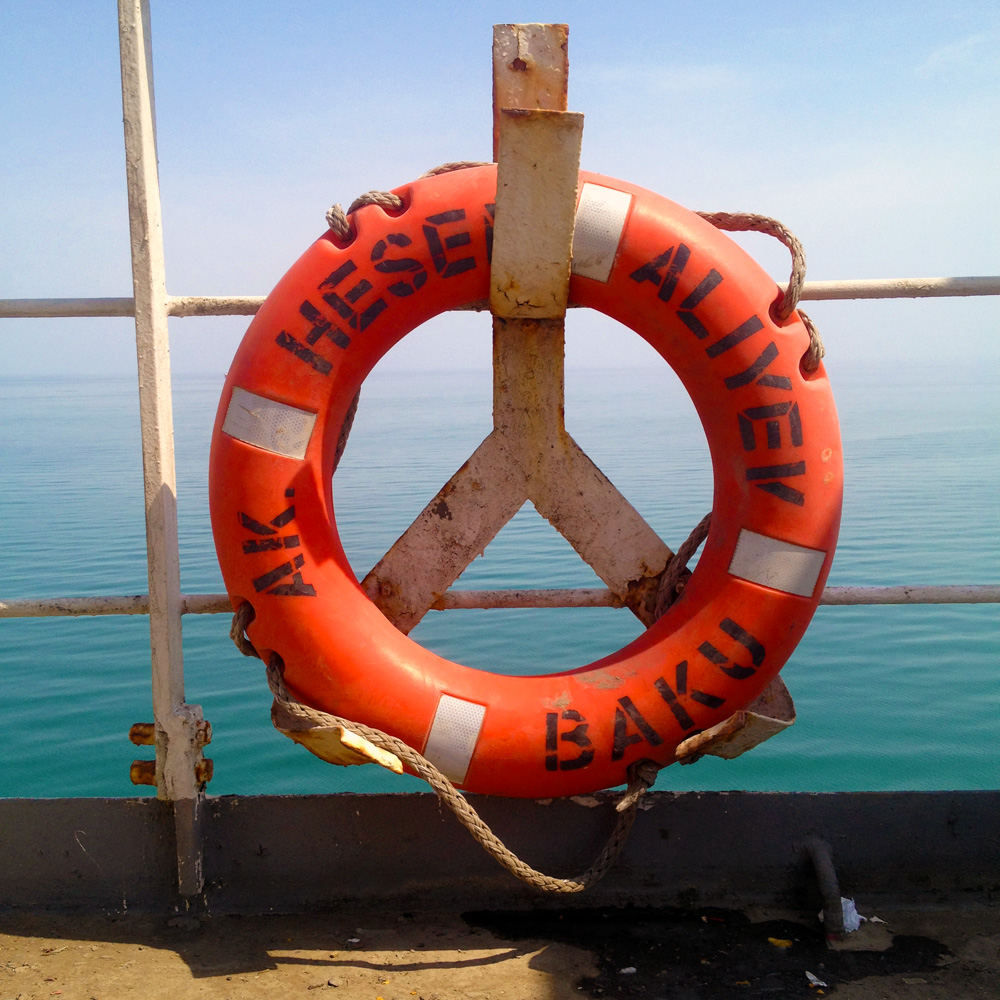 We met a whole bunch of awesome and funny Azerbaijani sailor students ranging from 18 to 20 years old. They were from the Azerbaijan State Marine Academy, some were from the Army and some from the Navy division.

They were on a 3 months straight training course. The entire 3 months they were stucked on this ferry, kept sailing back and forth from Baku to Turkmenbashi.

Most of the time when we saw them they were in their hot and steamy room waiting for orders, or just hung around because it were not their shift. I would be so bored to depth if I was in their situation.

Everything we did interested them, from how to use my Trangia cookware to boil water to make a Big Bon cup noodle to my solar powered Casio Protrek watch. 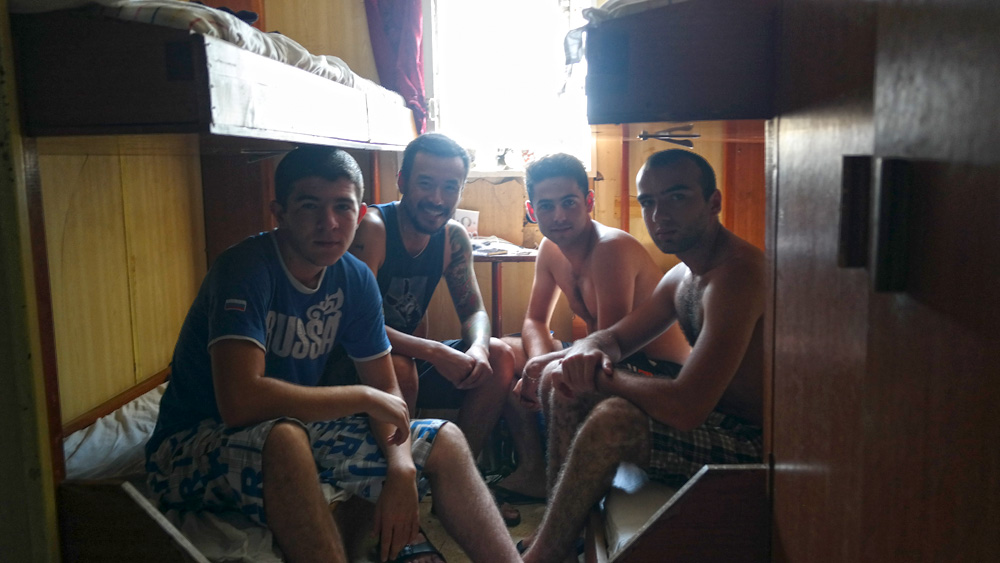 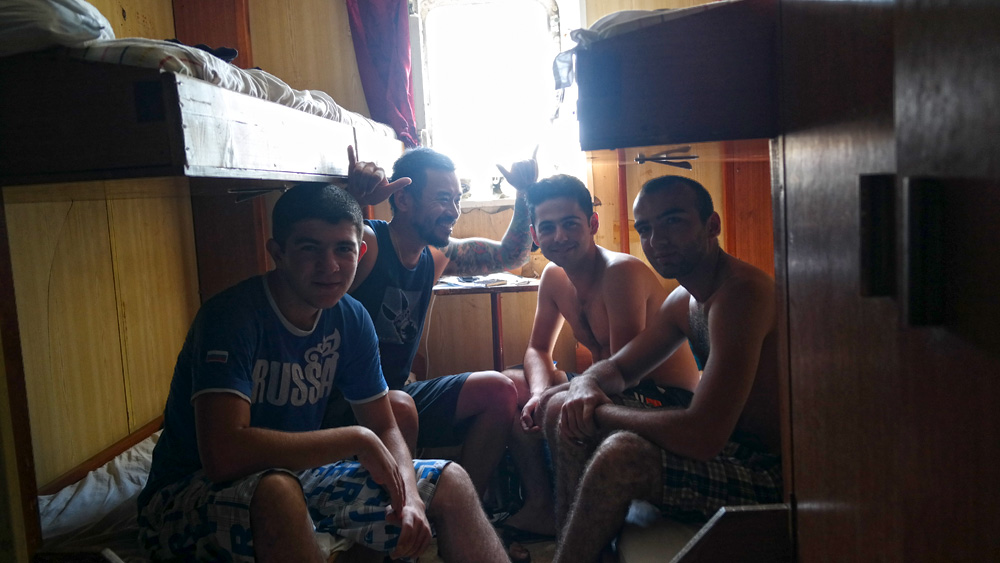 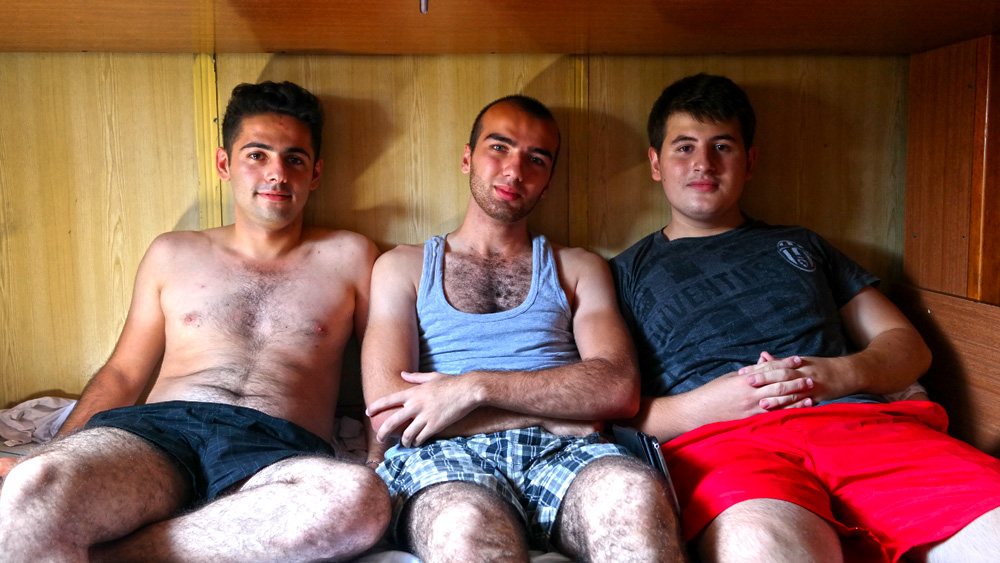 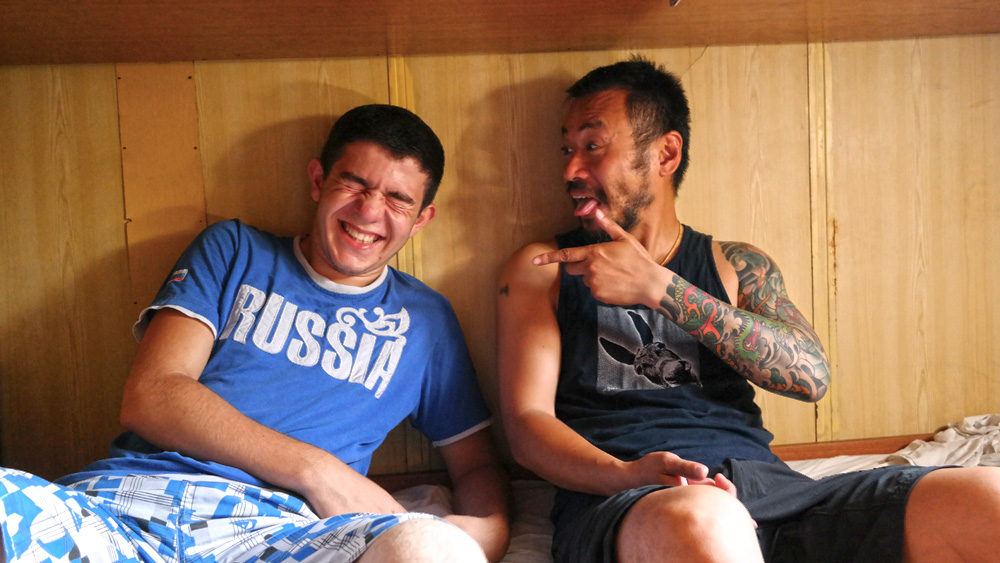 We became great friends by exchanging funny jokes in broken English. Basically anything we said to each other turned into the greatest joke ever.

It was one of the very memorable experiences on Mongol Rally, lots of laughters while time seemed to stood still. To be honest, the ferry ride is really not the best accommodations, especially the really filthy unisex bathroom (I don’t know how Young, Tien and Jo did their business in there) that was shared by over 30 peoples.

But with all the exuberant energies of our new Azerbaijani friends onboard, it became easy to kill time. Laughters really made this ride fun and relaxing.

Around 10am the Captain came down and told us there were food, coffee and beer available at the Kafe. The chicken with pasta (3 Azeri Manat each around $3.80 USD) are pretty tasty. I observed several Azerbaijani ladies cooking the chicken fresh by putting a pan in the oven and/ or pan frying them. 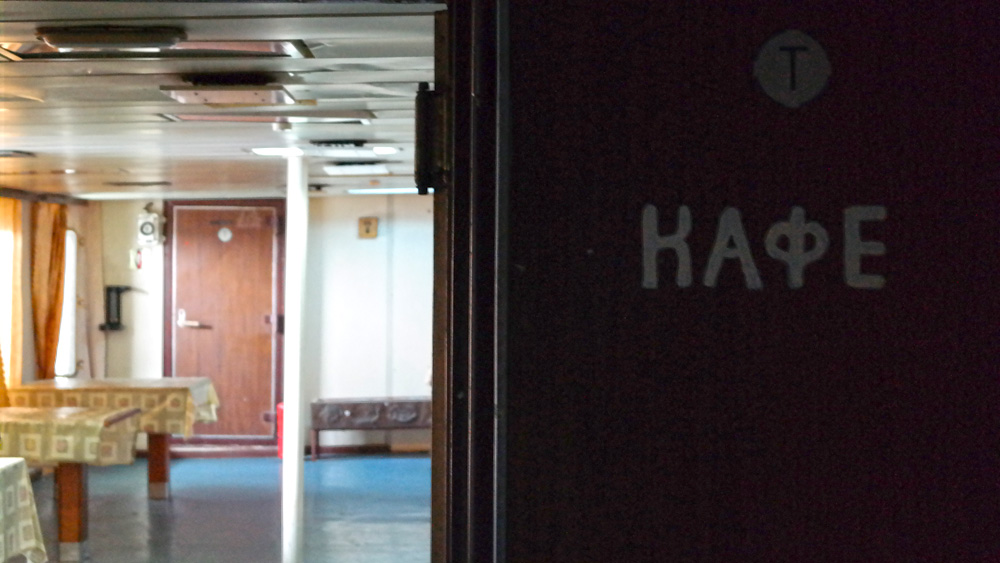 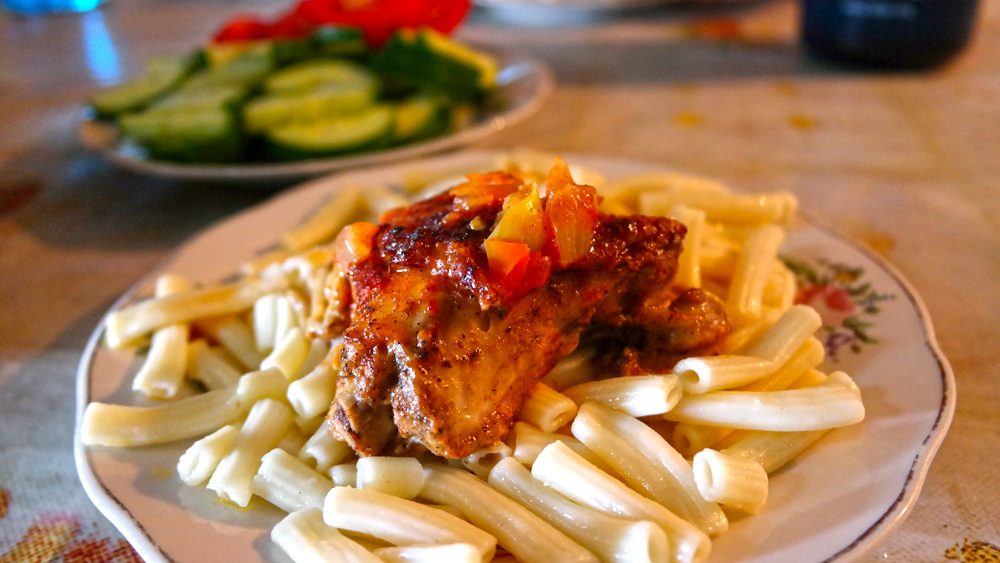 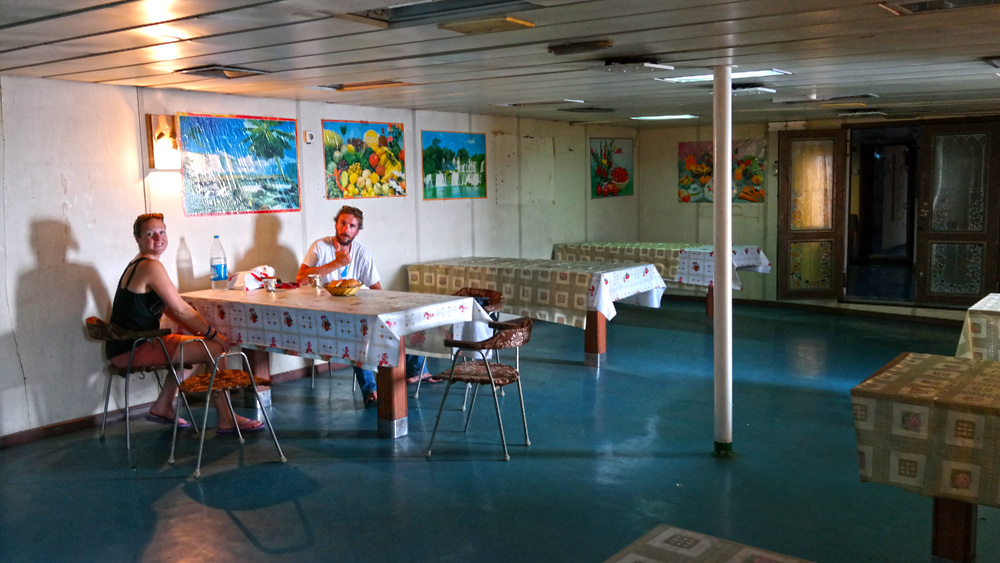 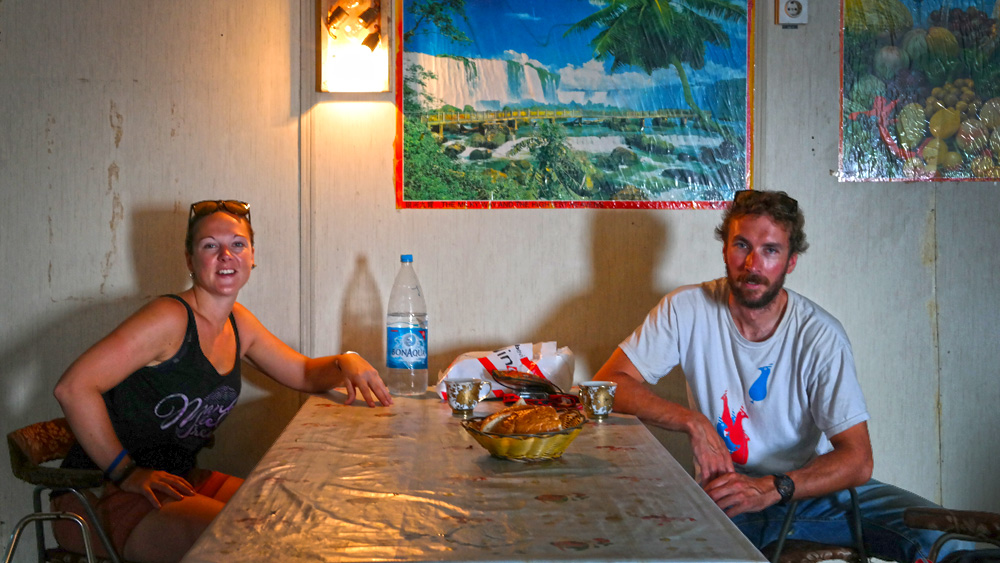 Jo and Hamish chilled at the Kafe. It was very hot and steamy you can tell by how glistening they were.

Below are some random photos of the ferry. 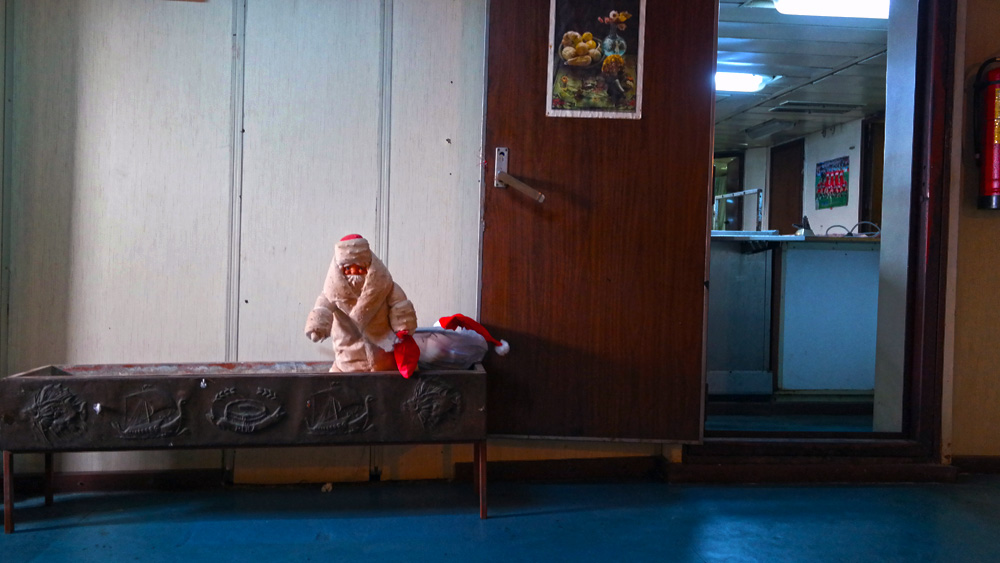 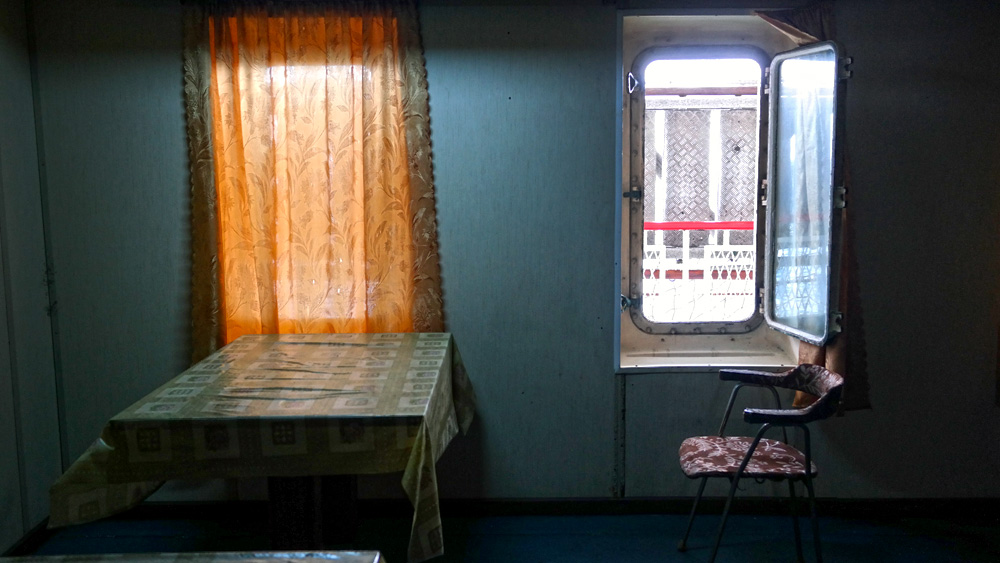 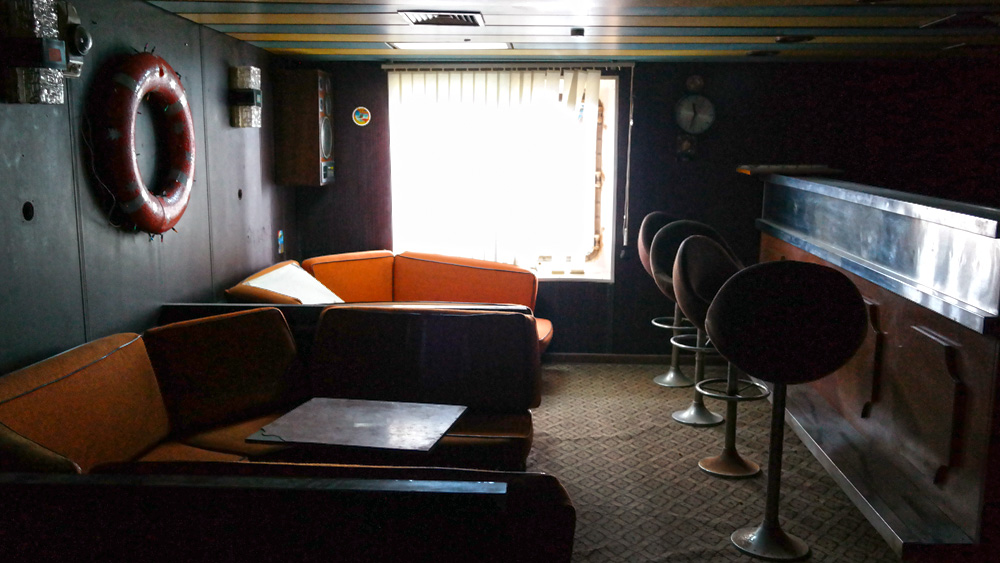 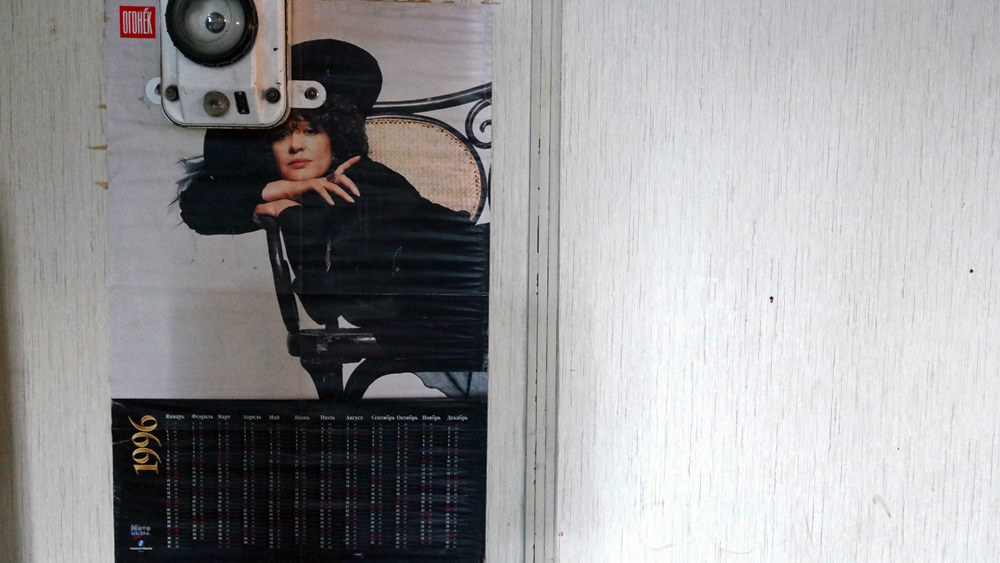 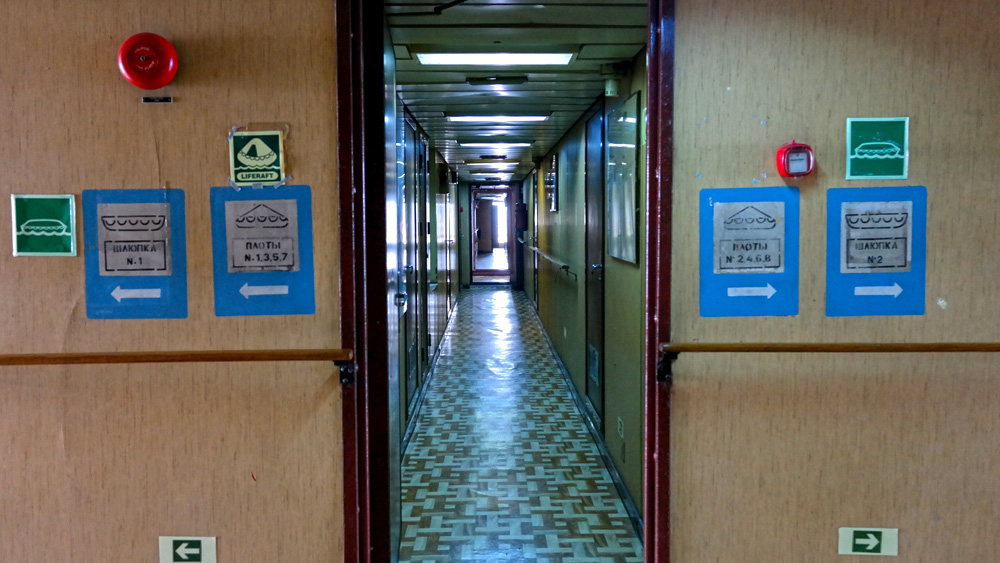